These Mediterranean Stuffed Peppers are loaded with ground turkey, barley and fresh vegetables. They are super easy to make and so healthy and delicious.

Stuffed bell peppers are a favorite meal of mine – because they are fun to eat, very easy to make, and always look so pretty on a dinner plate!

They are also a really good way to add in extra fiber and nutrition to your meals by adding them to the filling. 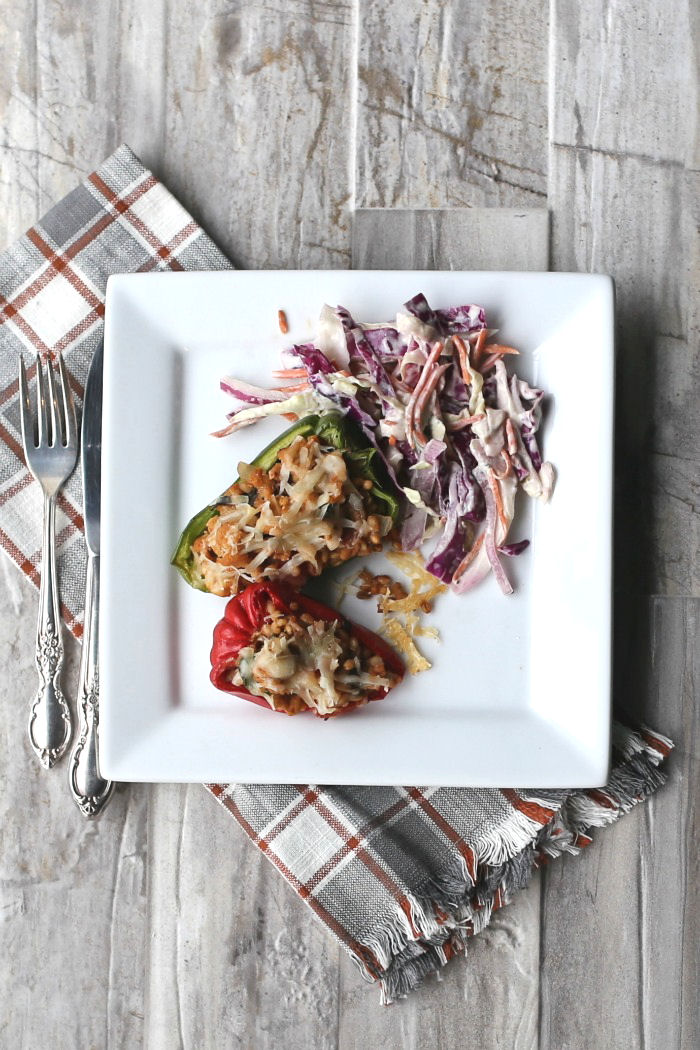 I love to look into the history of foods that I make for recipes.  Stuffed peppers are a huge part of the cuisine of Spain and Mexico where they are called rellenos.

They are also popular in India and many Scandinavian countries.

For today’s recipe, we are taking our stuffed peppers to another part of the world – The Mediterranean.

We’ll be using ground turkey and lots of fresh vegetables as well as pearl barley for this recipe. All of these are foods that fit well in the Mediterranean diet. 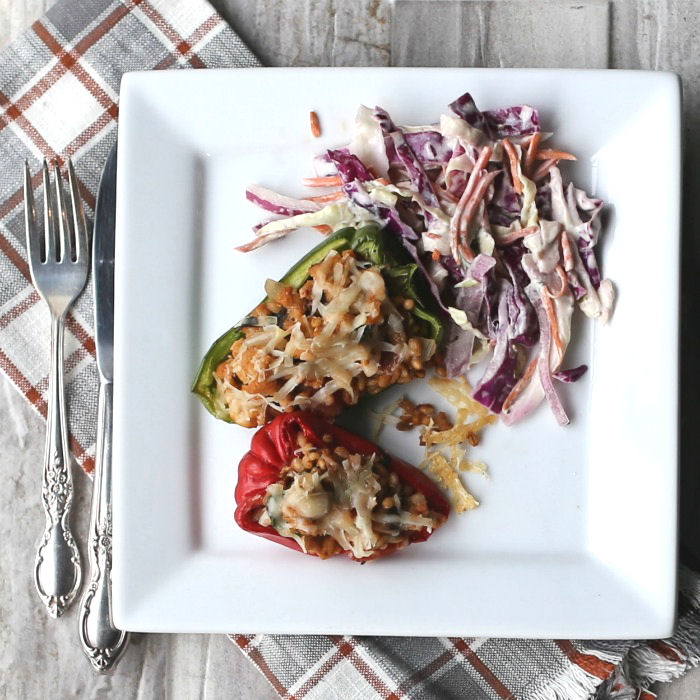 My vegetable garden is in full production mode right now, giving me lots of great vegetables to use in my recipes.

I have 3 types of sweet peppers and lots of Jalapeños, too. 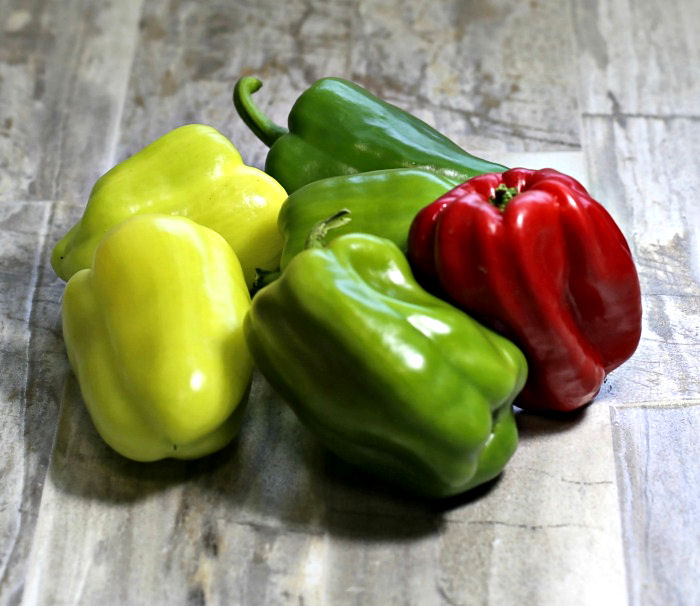 I love walking out my back door and coming back in with something to use for tonight’s dinner. It’s a very satisfying feeling.

Even if you don’t have a big garden, you can still grow vegetables. These peppers have been grown in pots and are producing very well! 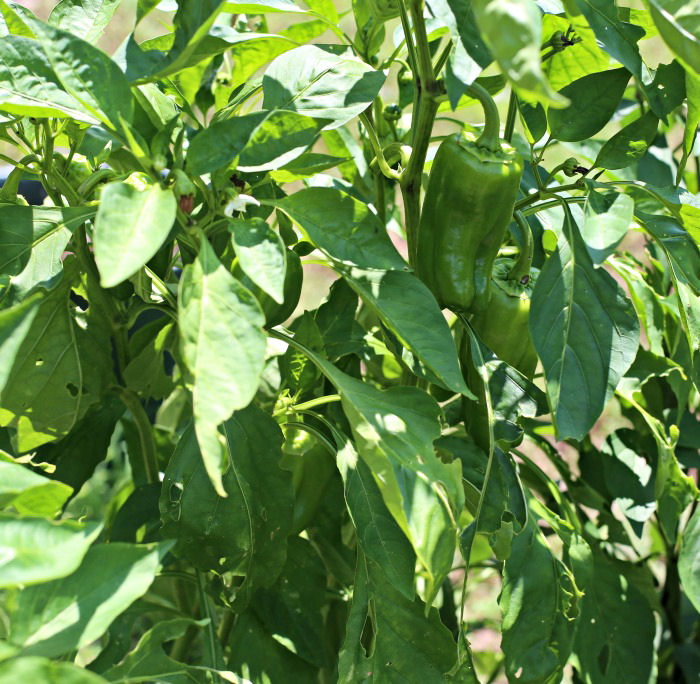 This recipe calls for 6 bell peppers the size that you normally get at the store.  The ones from my garden are a bit smaller so I am using 8 of them.

(I’m trying to use them week by week instead of having them all the same size at once!)

These peppers will give us a main meal as well as some stuffed left overs for lunch plus some extra filling to use as a mixture for whole wheat pita pockets!

Start by spraying your baking pan with cooking spray and trimming the peppers . Remove the seeds and membranes and cut a small slice from the bottom (If necessary) so that they sit evenly.

Season the inside of the peppers with salt and pepper. 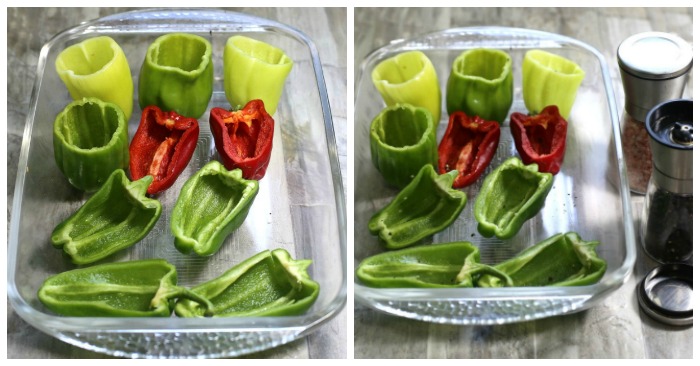 Some of my peppers are going to be “cup shaped” and others have been cut in half length wise so that they can be filled that way. Home grown peppers seem to have a mind of their own when it comes to shape!

Chop up the top that you cut off the peppers to use as part of your vegetable filling. Add the olive oil to a non stick pan.

Cook the ground turkey, chopped pepper tops, mushrooms, onion, and garlic until the turkey is browned and the vegetables are slightly tender.

Add the water, barley and tomatoes and cook until the barley is tender, then mix in the spinach and fresh basil to the turkey mixture. Cook a minute or so until it wilts.

Season the mixture with additional salt and pepper to taste if needed. 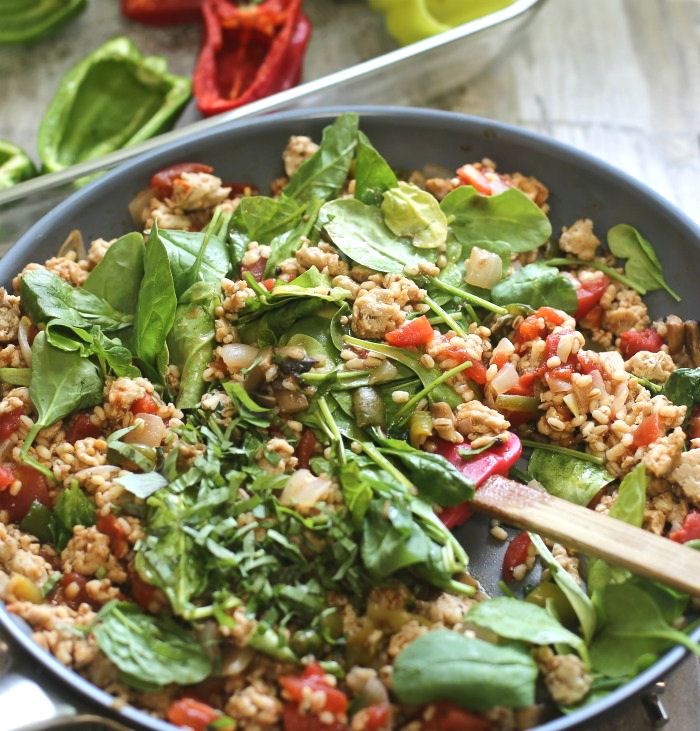 The mixture is good enough to eat on its own as a main course but adding it and some cheese to the peppers will take it to a whole new level.

I dare you not to try it at this stage! 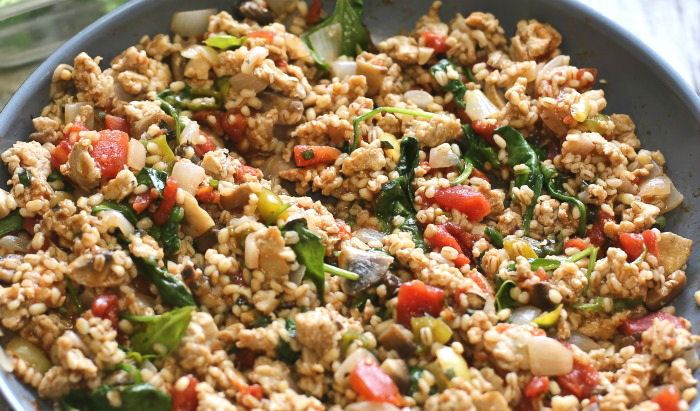 Time to assemble the stuffed peppers!

Spoon the mixture evenly into the bell peppers. Sprinkle the top with the grated Parmesan cheese and put in a preheated oven to bake for 20-25 minutes in the preheated oven until the filling is hot and the peppers are tender.

The tomatoes give the stuffing mixture a nice bright color and the barley adds loads of healthy fiber and a delightful texture. So much tasty nutrition in each stuffed pepper.

Your heart (and your taste buds!) will thank you. 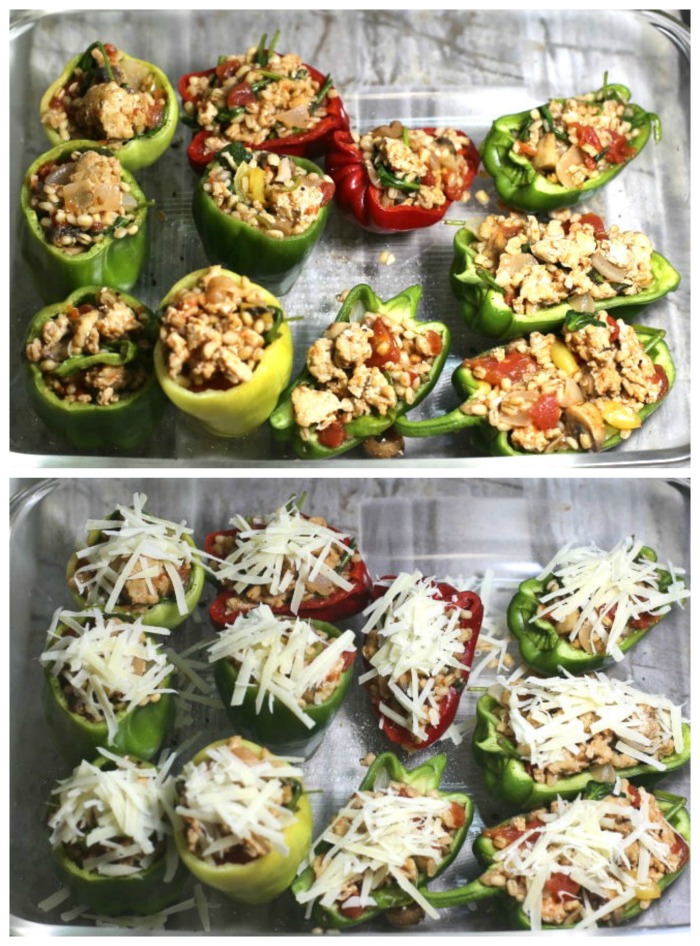 I also love the sweetness that the bell peppers take on when you use the oven to roast them. It really does bring out their natural sweetness.

Barley is a very healthy whole grain and is one of my favorites. Be sure to check out this recipe for One pot chicken barley stew for a winter recipe using it. 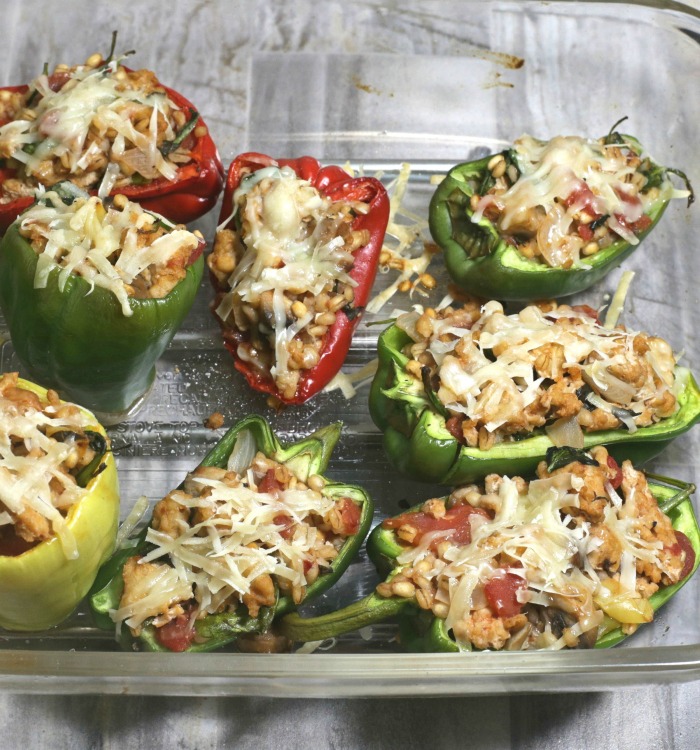 How do stuffed taste?

In a word – amazing!  The mixture is rich and has a wonderful texture.  Fresh vegetables and fresh herbs add a wonderful home grown garden taste and the ground turkey is light but still filling. 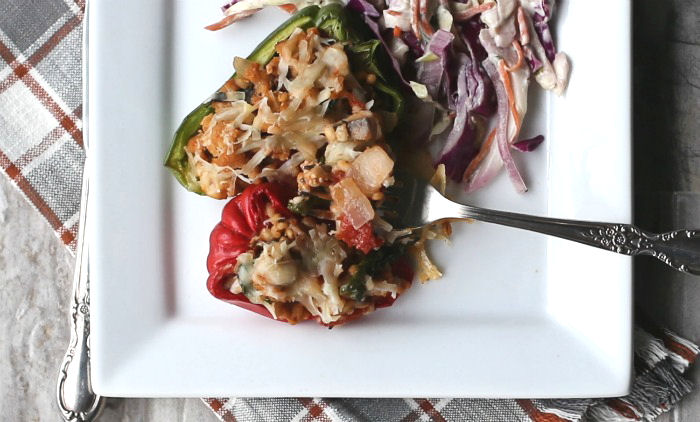 One of the great things about this recipe is that they make wonderful leftovers for lunches later in the week.  They taste as good cold as they do warm!

Their cup like shape makes them easy to transport even as a bagged lunch.  And if you want just pop them in a microwave for a minute or two to serve them warm. 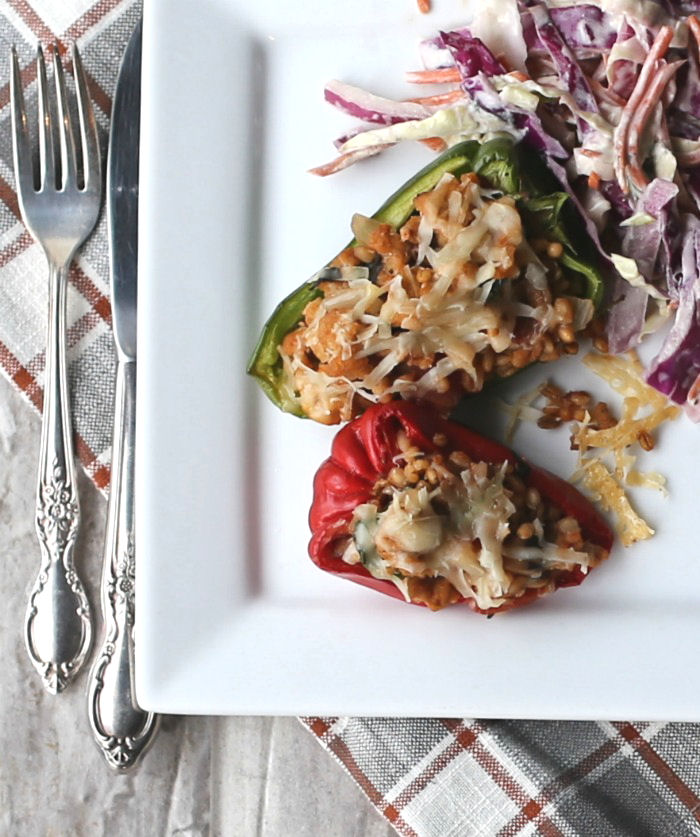 These ground turkey stuffed peppers are great served with a simple side salad, or try them with my recipe for Southern coleslaw.  Lots of texture and crunch to offset the softness of the pepper stuffing.

Getting kids to eat veggies is not always easy but that is not the case with these barley stuffed peppers.  For some reason, eating dinner out of a pepper makes the whole meal more fun.  The kids will really did into these.

This recipe is super easy to put together. Your actual time in the kitchen is only about 30 minutes, then you can have a glass of wine and relax while they finish up in the oven.

Add an easy side salad and you have a wonderful easy week night meal that the whole family will love.

This recipes for barley stuffed peppers serves six with 266 calories for each serving. The dish is high in fiber and protein and a great source of vitamins and minerals, especially vitamin C at 185% of the daily requirement!

Even though this recipe is fairly high carb, the carbs come from the barley and vegetables.  Barley has many health benefits.  It has a low glycemic index, so doesn’t raise the blood sugar as significantly as some other grains (particularly refined grains) do.

Time for some of my cooking tips. These little tips will help you get the most out of any stuffed pepper recipe.

They are so versatile! I love making stuffed peppers.  They are so adaptable because you can switch out the fillings with whatever you happen to have on hand in the fridge that needs eating up.

Don’t have mushrooms?  Use some extra chopped peppers or zucchini for the filling. No ground turkey?  Use ground chicken or ground beef.

Don’t like barley? Use brown rice instead. The sky is the limit on what you can put into them.

Even sized veggies help.  Be sure to chop your vegetables into even sized pieces. They will cook down a little but if you chop them fairly small and evenly, it will make filling the peppers easier. 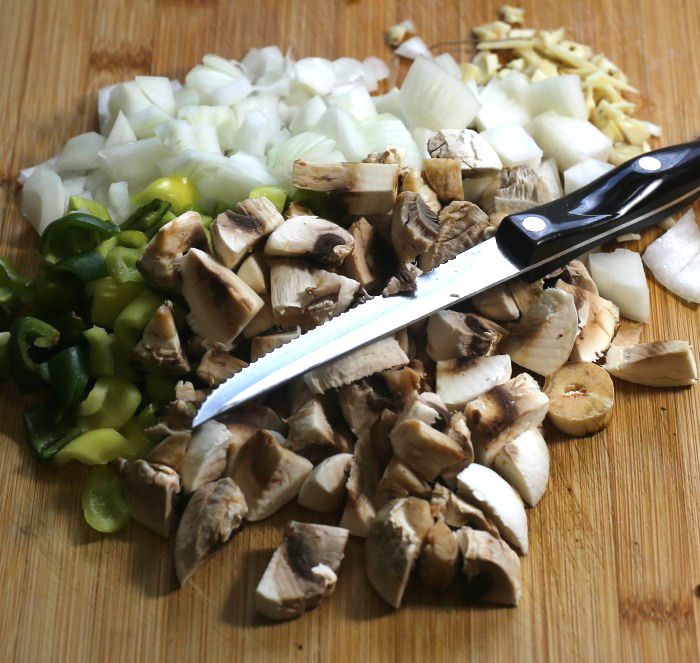 Chop those tops! Some recipes call for the pepper top to sit on top as a lid.  I like to chop it up to give extra fiber and flavor to the filling.

If you are using colored peppers, you can switch and swap for variety and color, as well.

Season well.  I like to season the inside of the peppers themselves with sea salt and cracked black pepper so the whole dish is well seasoned.

Cook the meat first. Cooking the ground turkey, barley and vegetables first on the stove top allows you to season the filling to taste.  It also makes the baking time for the peppers quicker so they don’t wrinkle as much in the oven. This gives a nicer presentation to the dish.

Go lightly on the cheese.  I am always looking for ways to keep the calories low without sacrificing the flavor of the dish.The filling for these stuffed peppers is super tasty.

That means that you can go a lot lighter on the cheese than some recipes call for. I only used 1/2 cup for all 6 servings and this kept the total calories below 270 calories.

The lower amount of dairy and use of ground turkey gives you a meal that fits perfectly into the Mediterranean diet and is a lot lower in calories that many stuffed pepper recipes.

Looking for a reminder of this recipe so that you can find it easily later? Pin this image to one of your healthy cooking boards on Pinterest! 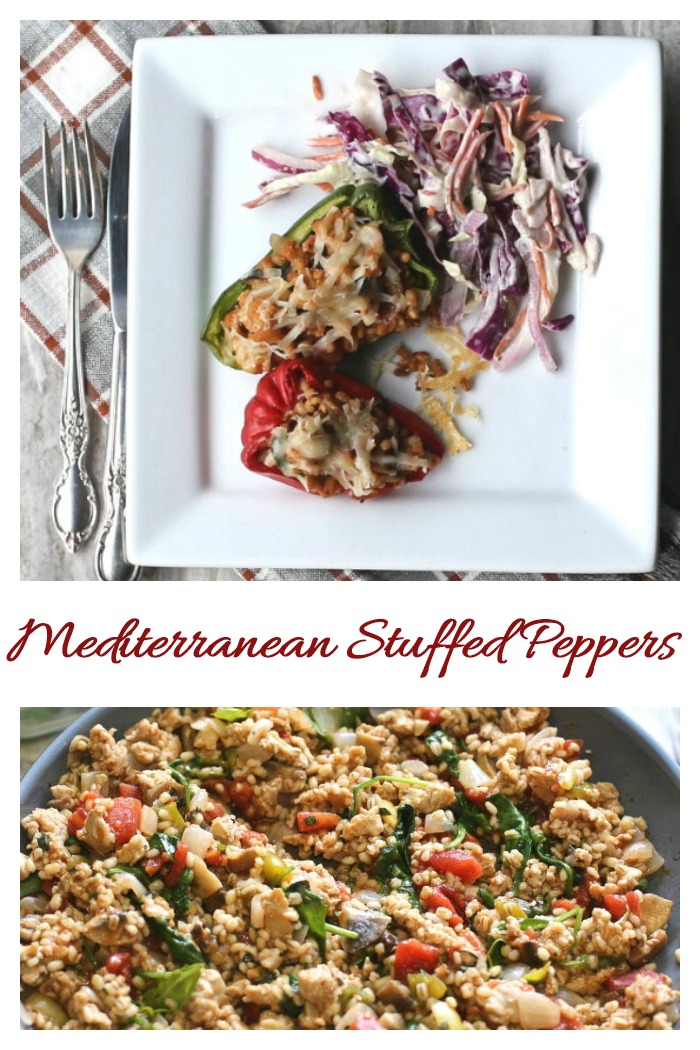 There you have it – you can print out the recipe for the Mediterranean stuffed peppers below.