The comforting feeling of a big bowl of soup is something that few other recipes can deliver. This Vegan butternut squash soup recipe is a remake of my traditional version with sherry.

My husband and daughter love soups all year long. For me, soups are a fall experience but since my family is so fond of them, I am always on the look out for a new soup recipe.

Since we also all love butternut squash and leeks, making a fall soup with them is a no brainer. The only problem is that my favorite squash soup recipe contains sherry and my daughter is vegan.

And while there are vegan sherry products available, they are not necessarily labeled as for vegans, so it is hard to tell if they are compliant to a vegan diet. 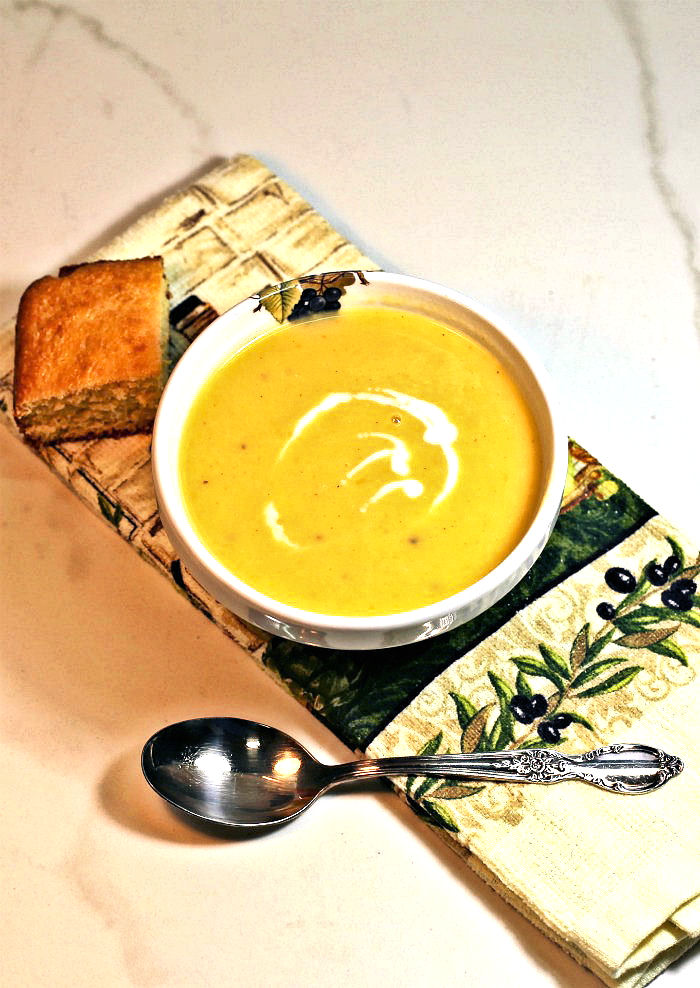 Sherry and a vegan diet

Sherry has an uncertain position with those who follow a vegan (or Paleo or Whole30) diet.  Whole30 forbids all alcohol products, Paleo says maybe it’s okay, and strict vegans balk at the possibility of gelatin or casein in the drink.

So what is a person to do when they want the taste of sherry in a recipe but also want to remain true to their diet plan?  Enter sherry vinegar to the rescue!

What is sherry vinegar?

Sherry vinegar is the product that forms when sherry has been distilled and turns into vinegar. The taste of sherry vinegar is rich and nutty like sherry but only slightly sweet. 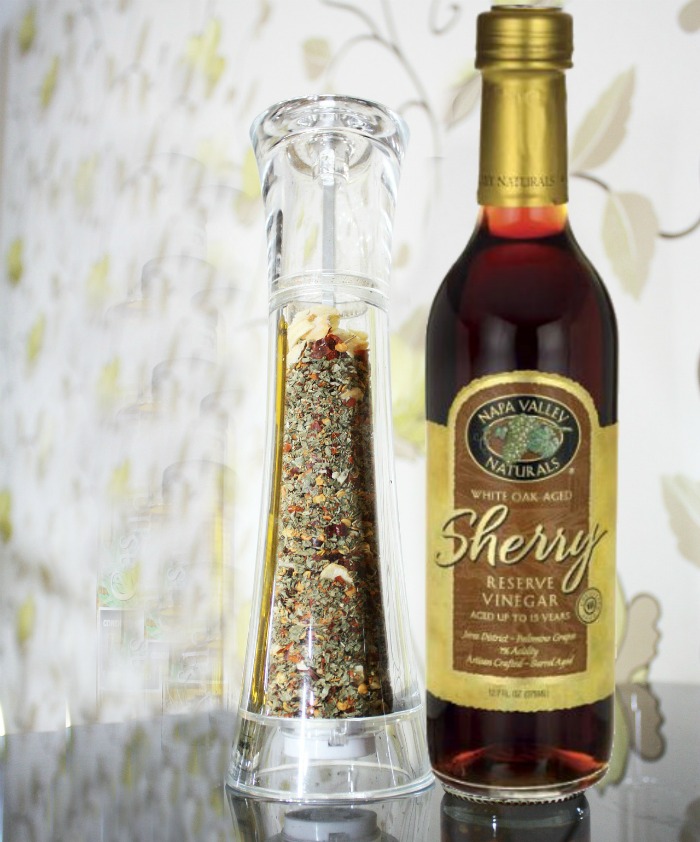 Since it is a vinegar, it is acidic but not as overpowering as balsamic or white wine vinegar. And for our recipe, it’s a good substitute for sherry in my original butternut squash recipe.

We’ll be making this soup in the crockpot.  Since my husband loves soup recipes even in the summer, the crockpot will do the job of cooking the recipe without heating up the kitchen.

Plus, I get to smell the soup cooking all day long while I am doing other things. What is not to like about this scenario?

Butternut squash is a sweet and hearty vegetable that has the perfect texture to make into a creamy and rich fall soup. It is also called butternut pumpkin because of its color.

This soup has a complex, rich flavor that comes from the combination of leeks and butternut squash.  They also thicken the soup so that no heavy cream or other thickeners are needed. 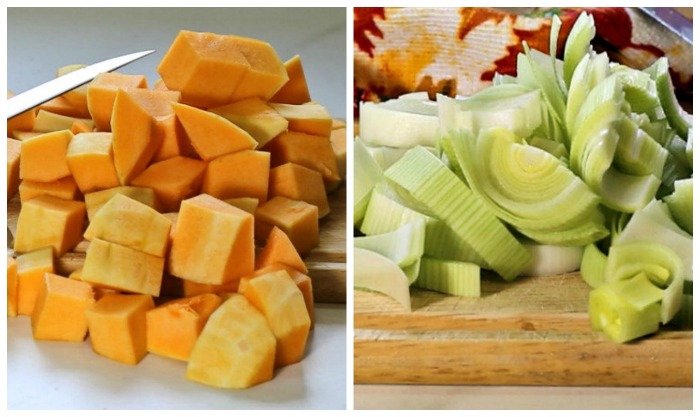 To make this crockpot butternut squash soup recipe, you will need these items: 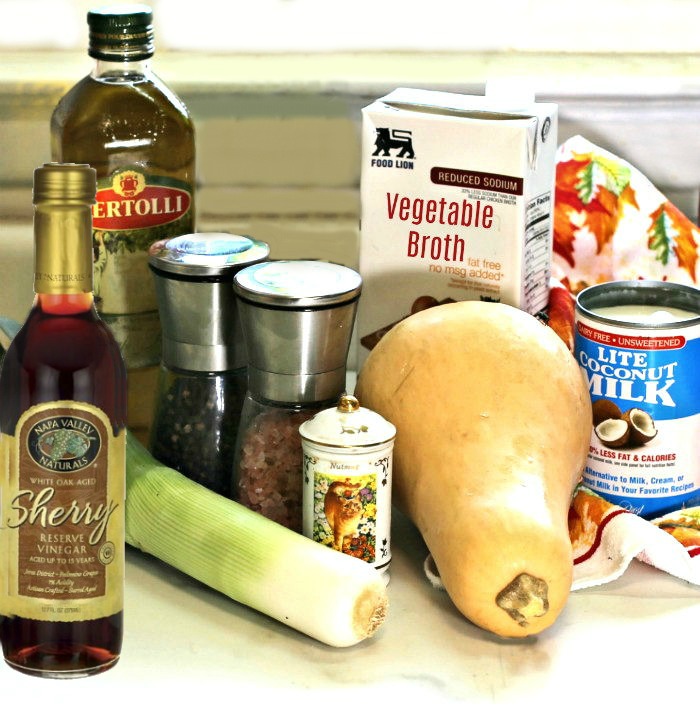 I like using leeks in soups because they have an onion-like flavor but it is very mild. Using them in this fall soup gives a subtle onion flavor that won’t overpower the richness of the squash.

To make the soup, you start by cooking the leeks and butternut squash pieces in some olive oil on the stove top. 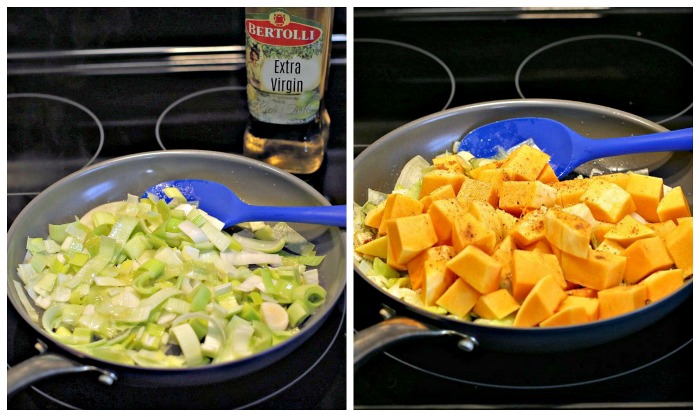 Don’t skip this step! It only takes about 10 minutes but adds a lovely caramelized flavor that the soup won’t have if you just dump everything into the crock pot.

Once the vegetables are starting to get tender, put the sherry vinegar in the crock pot and layer over the leeks and squash.

Add the salt and pepper and grate in some fresh whole nutmeg. (fresh nutmeg adds a lot of flavor and is best to use in this recipe.) 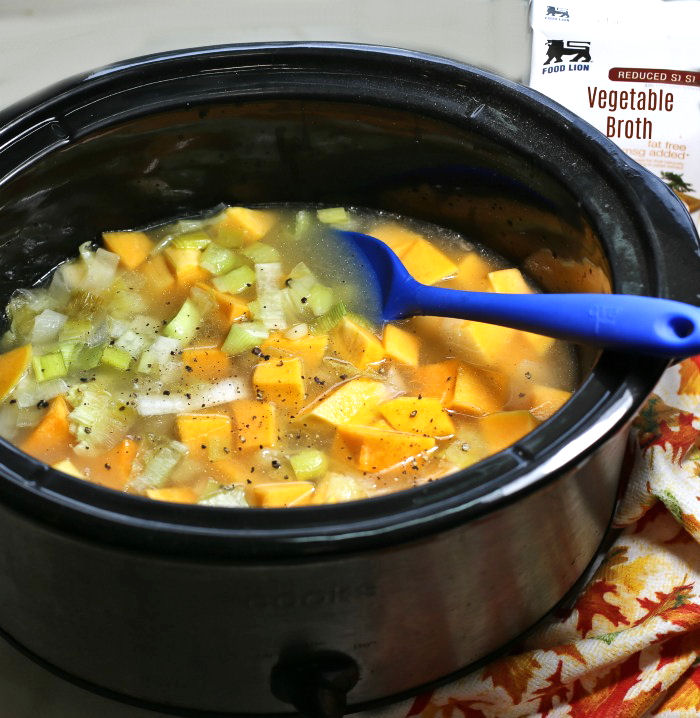 Pour in the vegetable stock and stir well to combine.

When the veggies are very tender, stir in the lite coconut milk and use an immersion blender to process the soup until it is smooth and thick.

(If you use a food processor or regular blender, it is best to do this in a few hits, to reduce the risk of making a big mess. – don’t ask me how I know this!) 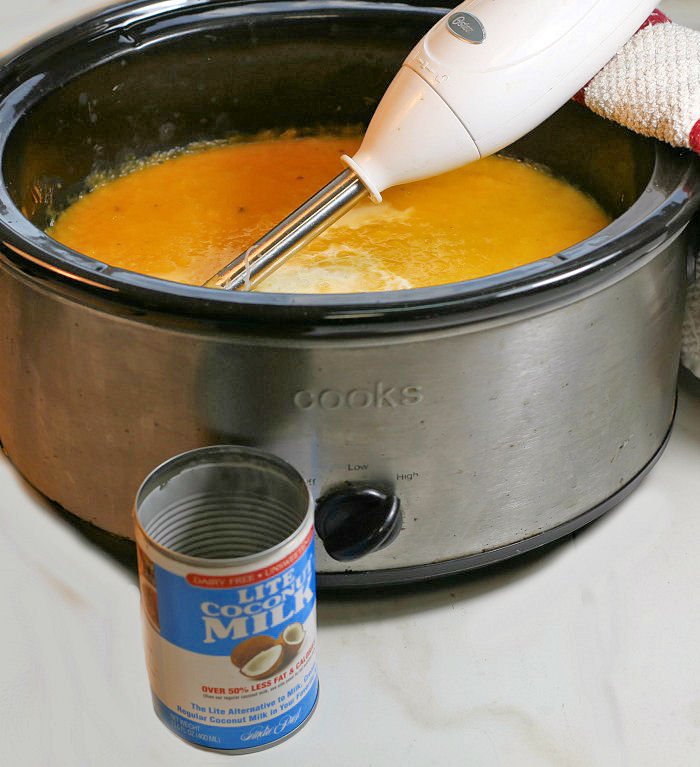 Finishing cooking on low for a few more minutes until the soup is simmering, then serve.

This soup is brimming with the flavor of fresh leeks and rich butternut pumpkin. It has just a hint of nutmeg and the sherry vinegar and coconut milk ties the flavor together in a lovely way.

Serve the soup drizzled with some of the coconut milk for a nice presentation. 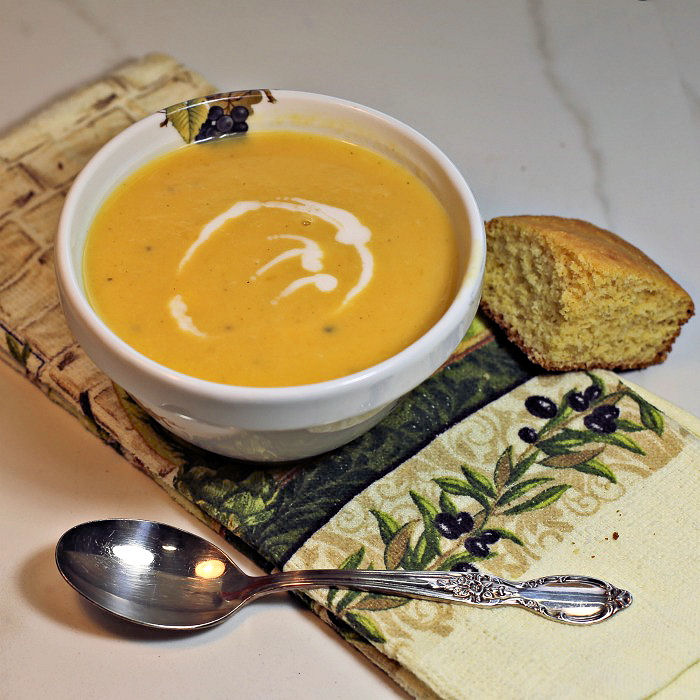 I like to serve the soup with some vegan corn bread or my homemade crusty bread. (not for Paleo or Whole30 since they don’t allow bread products)

Even though this rich and creamy looking soup would appear to be decadent and cream filled, it’s not.  Since I used lite coconut milk, this kept the fat and calories down a bit.

The recipe serves 10 and each serving works out to 132 calories. It has 3 WW Freestyle points and is gluten free, Paleo and Whole 30 compliant.

This makes is perfect to fit into any healthy diet regimen. 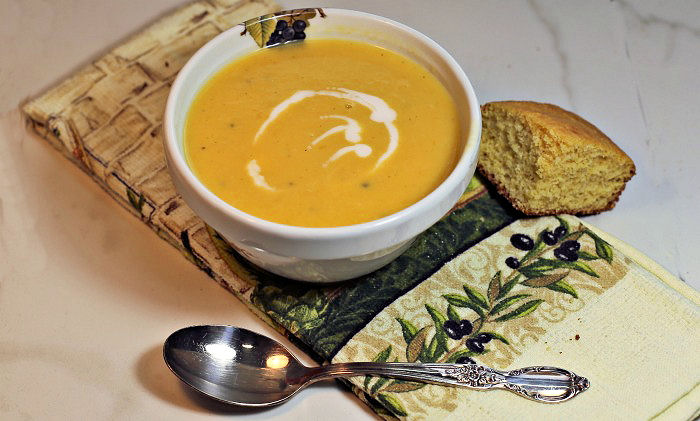 Since the thickness and creaminess comes from blending the butternut pumpkin and leeks, we don’t add extra calories that come from heavy cream or other thickeners.

The taste of this soup is very elevated. I find it to be quite like gourmet soups that you get at a nice restaurant, but it is so easy to make!

Pin this vegan soup for later

Would you like a reminder of this delicious vegan butternut squash soup with leeks and sherry? Just pin this image to one of your vegan boards on Pinterest. 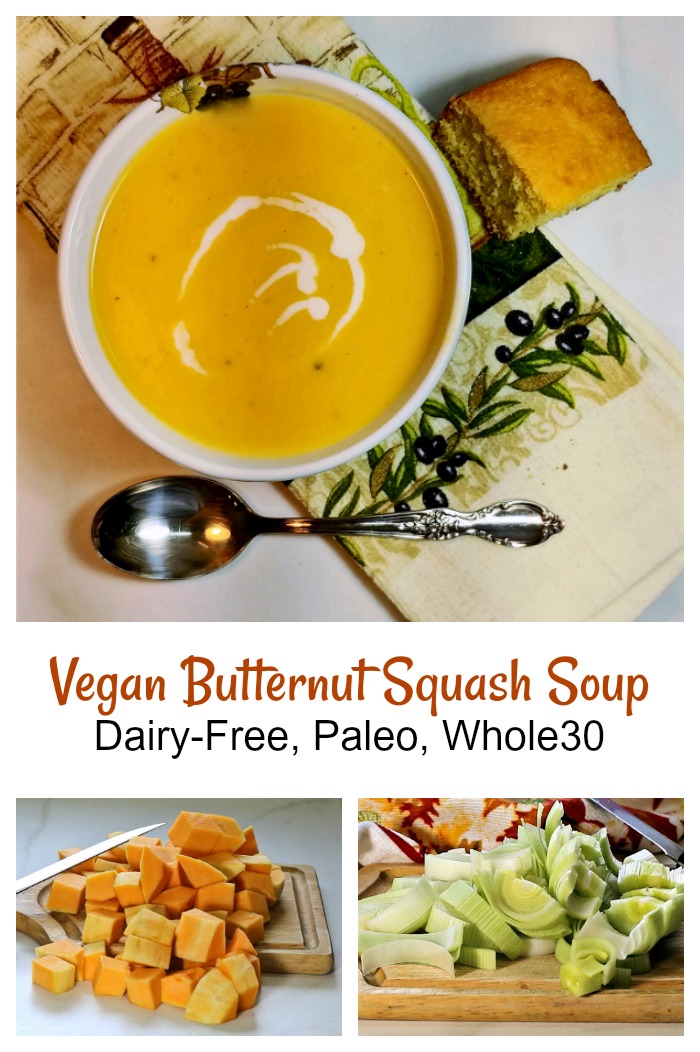 If you don't have an immersion blender, you can use a normal blender or food processor. Blend in batches and return to the crock pot.

As an Amazon Associate and member of other affiliate programs, I earn from qualifying purchases but the price is the same for you.