It’s hard to believe that Easter will soon be upon us! These Dutch apple crumble parfaits will be the star of your Easter dessert table.

It seems as though we were just celebrating Christmas a few weeks ago. Easter is such a special time for family to gather together. I love to make something new to treat my family each year.

But, sometimes, this is also a busy time of the year for me too and such is the case this year. So, I decided to take a short cut by making these apple crumble parfaits. But don’t let the ease of making them fool you.

They are super tasty. No one will know that you decided to make this a semi home made treat! 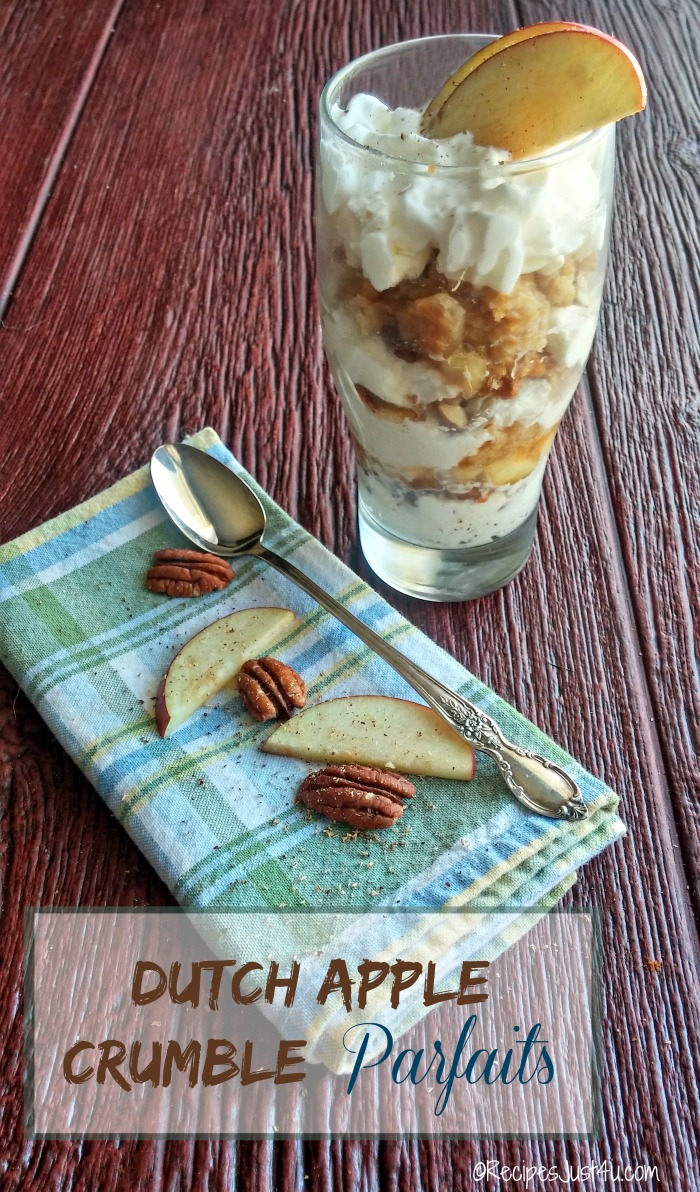 In France, the term parfait refers to a frozen dessert that is made with sugar syrup, eggs and cream.  In the UK, the term has nothing to do with dessert, since it refers to a smooth meat paste!

Here in the USA, the term parfait is usually a some sort of variety of the French style dessert with layers of cream, ice cream, jello or other ingredients that are topped with fruit and cream.

What is special about the dessert is really more the presentation than what goes into it. Using a tall glass and adding those layers gives a special look to the dessert. \

You can be casual in presentation, as in a Mason Jar mug, or use something much finer, such as a brandy snifter, crystal glasses, tall parfait glasses or red wine glasses to serve the dessert.

The main factor in the choice of glass is that it should be tall and you should be able to see through it, so that you can see the layers.

Ideally, the glass will be wider at the top, than at the bottom. (More on that later!!) 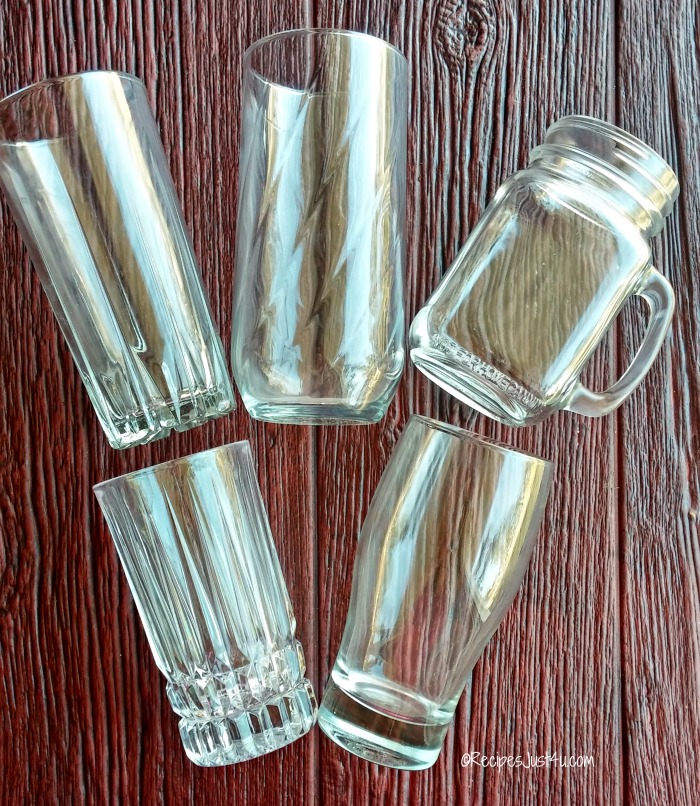 I told you that this would be a semi home made dessert. That means that I am using something that will give me the end result that I want without a lot of time.

Making a whole Dutch apple pie and then deconstructing it into parfaits would take hours. Instead of doing that I chose to use a frozen apple pie.

To make these delicious parfaits, assemble your ingredients.  Since we will be using a Dutch apple pie, we won’t need too many other supplies.

Some heavy cream, chopped pecans, an apple to garnish, and both cinnamon and whole nutmeg will do it.

Bake the pie according to the package directions.  Will the pie is baking, you can read a book or sit in the garden.  That is my favorite part of the recipe!

Once the pie is cooked, let it cool for a few hours and sit in the garden some more!  I am LOVING this recipe! 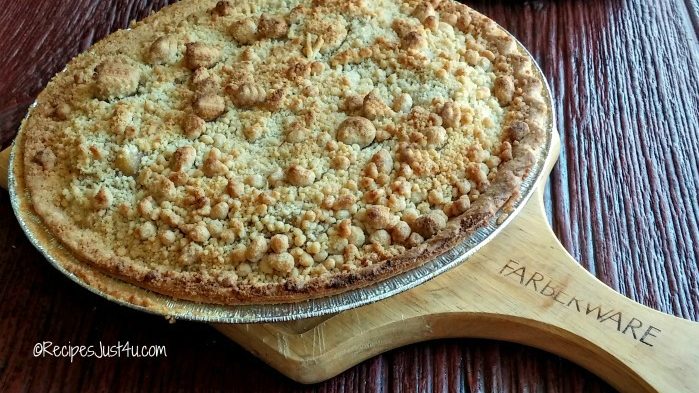 First you will need to beat the cream until stiff peaks form.   It will want to hold up well with the weight of the other layers and toppings.

I did my whip cream in my stand mixer.  I just let it beat for about 4 minutes while I cleaned up my kitchen (so that I can go out and sit in the garden as soon as the parfaits are finished!) 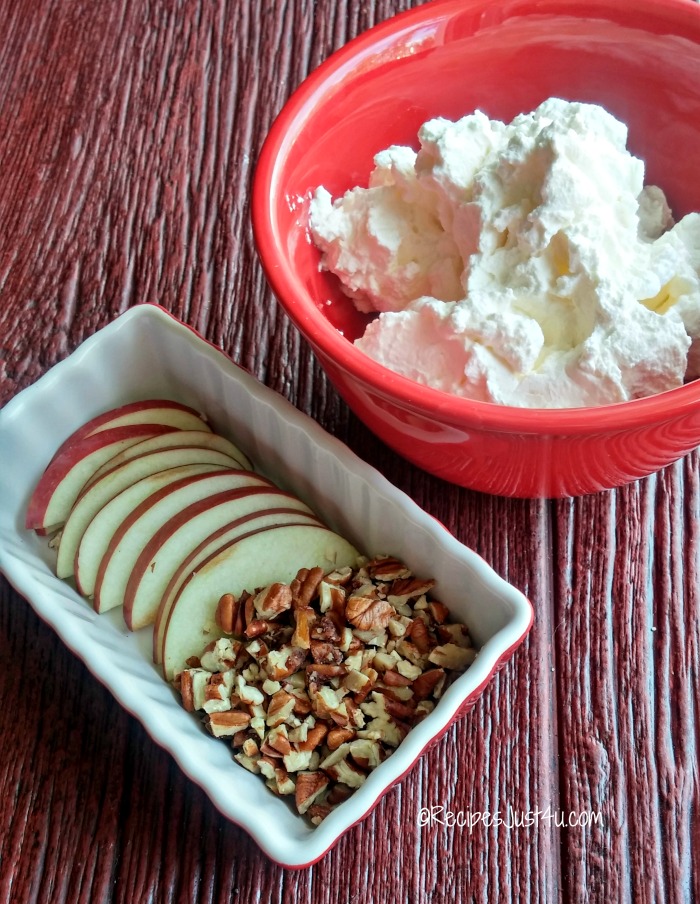 Separate the topping from the pie and place it in a small bowl.  Don’t worry if you don’t get it all off the pie.

The layers will be next to each other in the parfait. 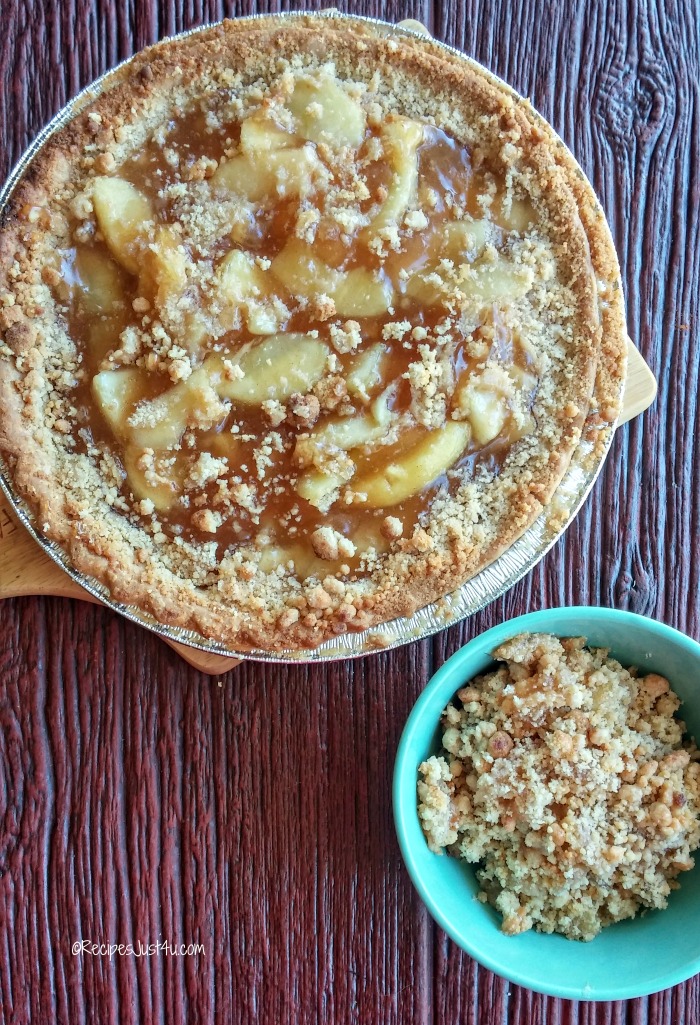 Now cut the pie into 8 pieces and then each piece into several chunks.  Each parfait will have one piece of pie, layered in the glass with the other ingredients. 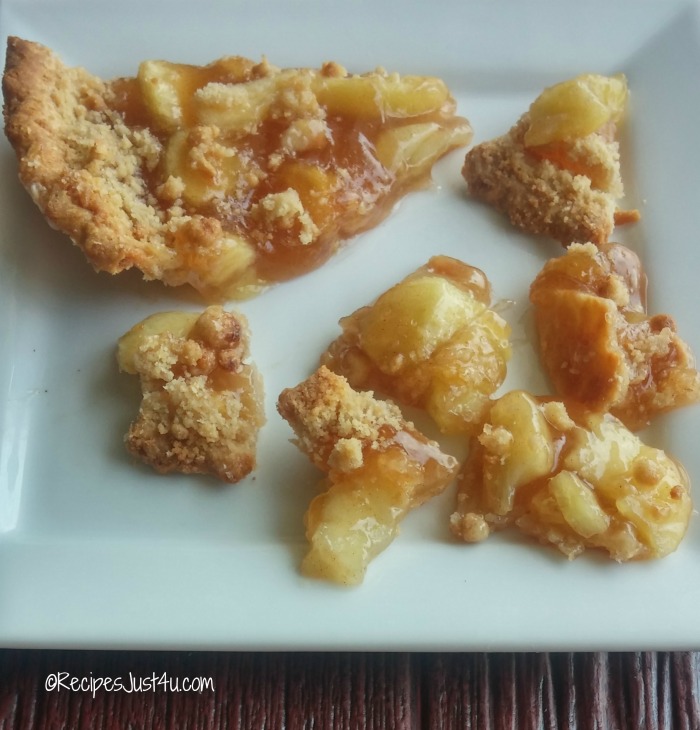 Choose your glasses.  Ideally, you would like parfait glasses, but if you don’t have them any tall glass will do.

Start by spooning in the whipped cream in the bottom of the glass. Sprinkle with the combined spices and start the layering. 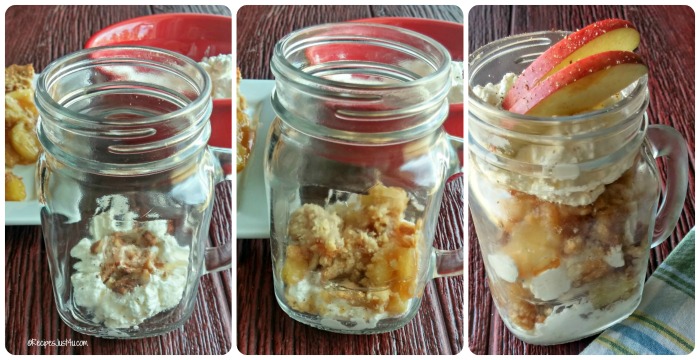 Repeat with more whipped cream, some cinnamon, a grate of the whole nutmeg, pie chunks, crumble, and topping. Continue layering until you come to the top of the glass.

Finish with some whipped cream, a sprinkle of grated nutmeg, and a couple of thin slices of fresh apple to garnish. 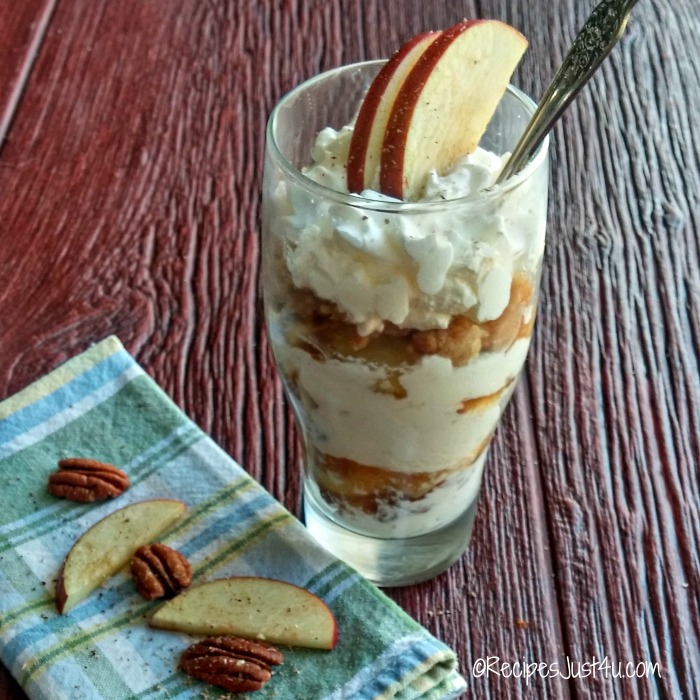 Your own apple pie in a glass, all dressed up parfait style!  These are super delicious and will be the hit of your gathering.

I tried making these Dutch apple crumble parfaits in two different types of glasses:  Mason Jar mugs that looked neat but had a smaller opening at the top than the bottom of the glass, and a Pilsner type of glass that was wider at the top.

The Pilsner glass worked better.  It is easier to spoon the ingredients into a glass with a wider top than bottom.

The main problem with a narrow opening is that it is hard to get the ingredients tidy lower in the glass without constantly having to wipe the inside of the glass.

Trust me on this one….use a glass that is wider at the top unless you want to spend hours making these! 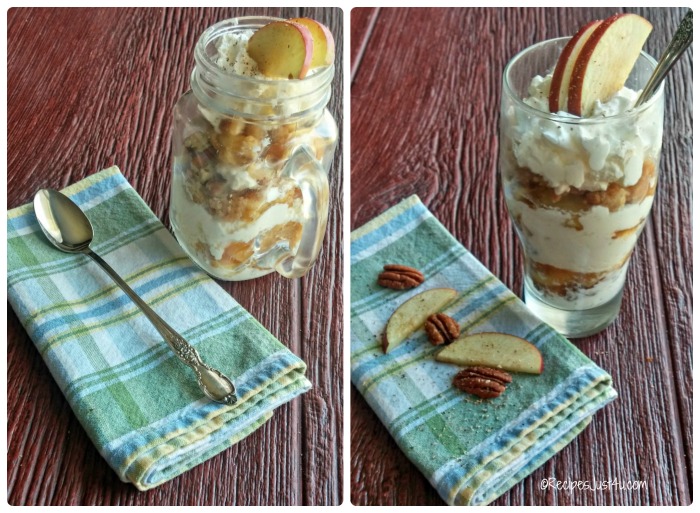 The Dutch apple crumble parfaits are rich and creamy with a bit of crunch from the added pecans. Your family will love them, and I guarantee they won’t want to wait until the next holiday to have another! 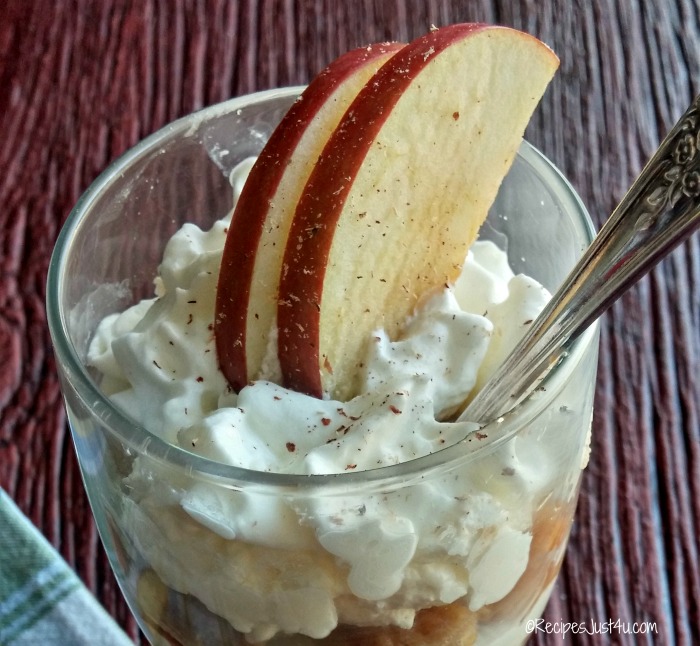 Dutch apple crumble parfaits are such a fun dessert twist on a normal apple pie.  The crowd will love them and you won’t even need to tell them that you took a short cut to make this special dessert.

TIP:  Parfait spoons will make this dessert much easier to eat than using normal dessert spoons. Parfait spoons have a longer shaft to them and this allows you to reach the spoon part right down to the bottom of the glass you use.

And that is what we want, isn’t it?  EVERY-LAST-DROP! 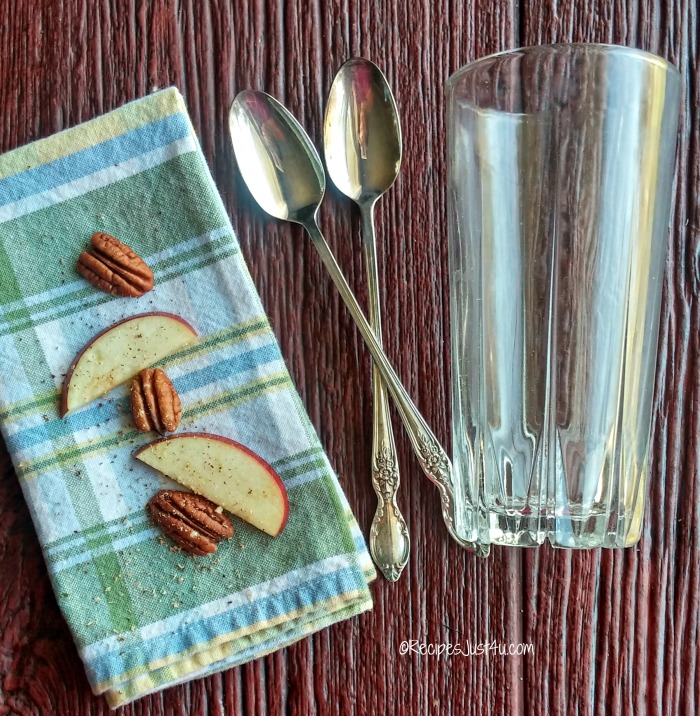 What is your favorite semi home made dessert idea?  I’d love to hear about it in the comments below.

Glad you liked it Stacey. This is the first time I have made parfaits and they are my new love! Carol