A crunchy crumb crust (AKA crumble crust) is a cooking technique that I use for a lot of my recipes. It is super versatile and useful in pie recipes, bar recipes and so much more.

This delicious crust can form the bottom layer of bar and cheesecake recipes and can take the place of a pie crust anytime you don’t want a double pie crust dessert.

Crumb crusts are also MUCH easier to make than a standard pie crust.  If you have a food processor and a few ingredients, you can make a crumble crust in just seconds.

Keep reading to find out how to make the versatile crumb crust. 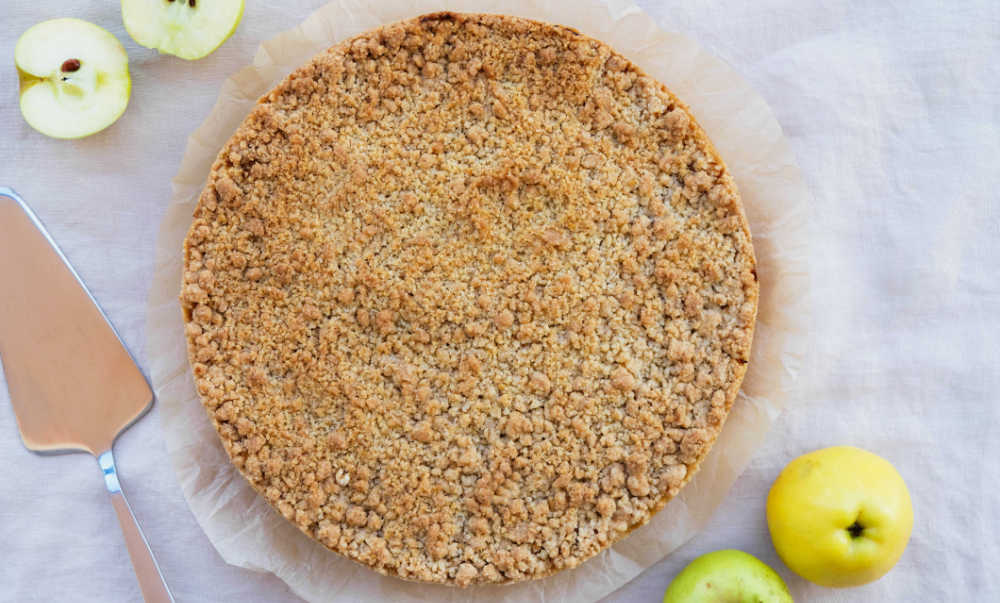 If you don’t have a food processor, a heavy marble rolling pin also works well.

Just put the dry ingredients in a zip lock baggie and crush them by rolling the pin over the top until you have a crumb like texture. Then melt the butter and combine with the crumbs in a mixing bowl.

A food processor is my first choice of tool for this crumble crust project since you can put the butter in with the flour and sugar so it saves the step of mixing. 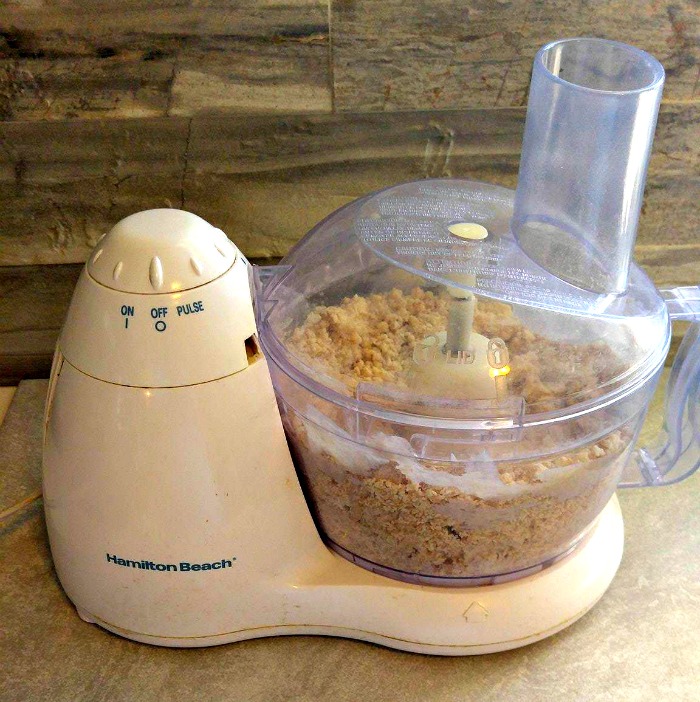 If you have 3 ingredients and a food processor, you can make a crumb crust (AKA crumble crust) in just seconds. Head to Recipes Just 4U to find out how to make one.  Click To Tweet

What is a crumble crust?

A crumb crust recipeuses existing food items in your pantry that are mixed with fat to turn into a crumb mixture.

Once you have the mixture made, it is pressed into a pie pan or baking dish to form a shell for dessert toppings.

Basically a crumb crust (or crumble crust) is made from three ingredients: butter, some type of sugar, and one other ingredient.

The beauty of a crumb crust is that you can decide what that third ingredient is depending on what else you want to put on top of the crust.

Variations on a crumble crust

Crumble crusts are very adaptable to other ingredients.  Here are a few ideas for changing the basic crumb crust recipe into a more creative crust. 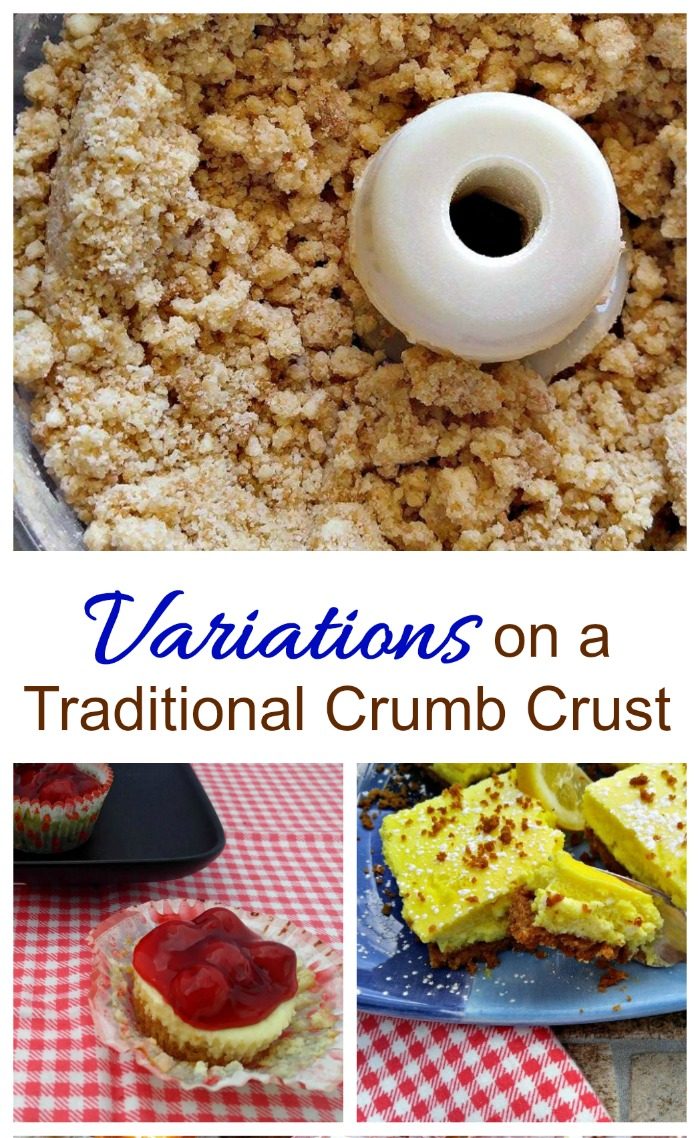 For a crumble crust, use a mixture of the following: (I am showing both white sugar and brown, you can use either in the recipe.) 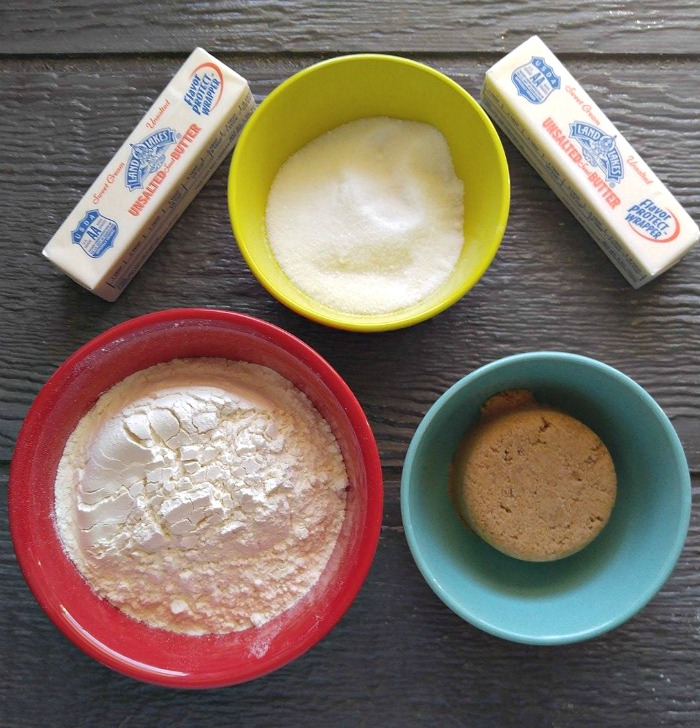 Want to see how easy it is to make a crumble crust recipe? Just dump all of the ingredients into a food processor. 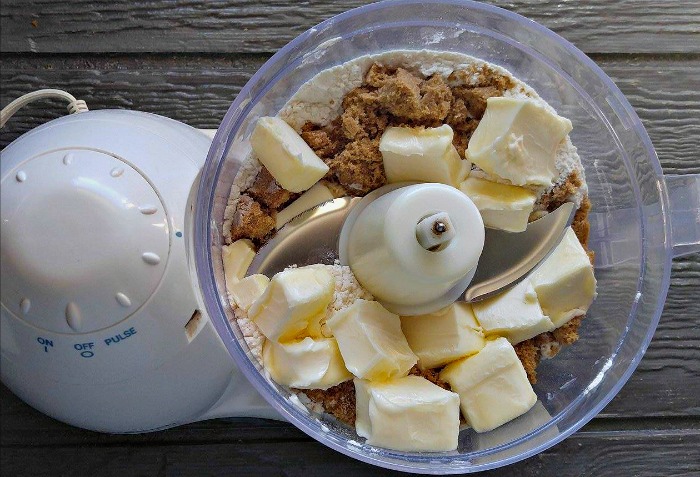 Give the ingredients a few pulses with the pulse button and, a few seconds later, the flour and brown sugar combine to make a wonderful mixture that is just perfect to use in bars or under pie filling. 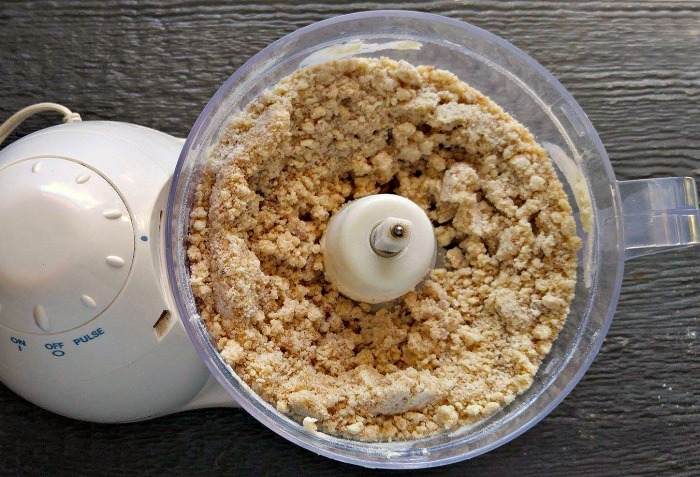 Butter at room temperature will be easily incorporated into the brown sugar and flour making a coarse corn meal type of texture with a few larger clumps in it.

The big problem is trying not to taste it when it is done, Now THAT is a challenge! 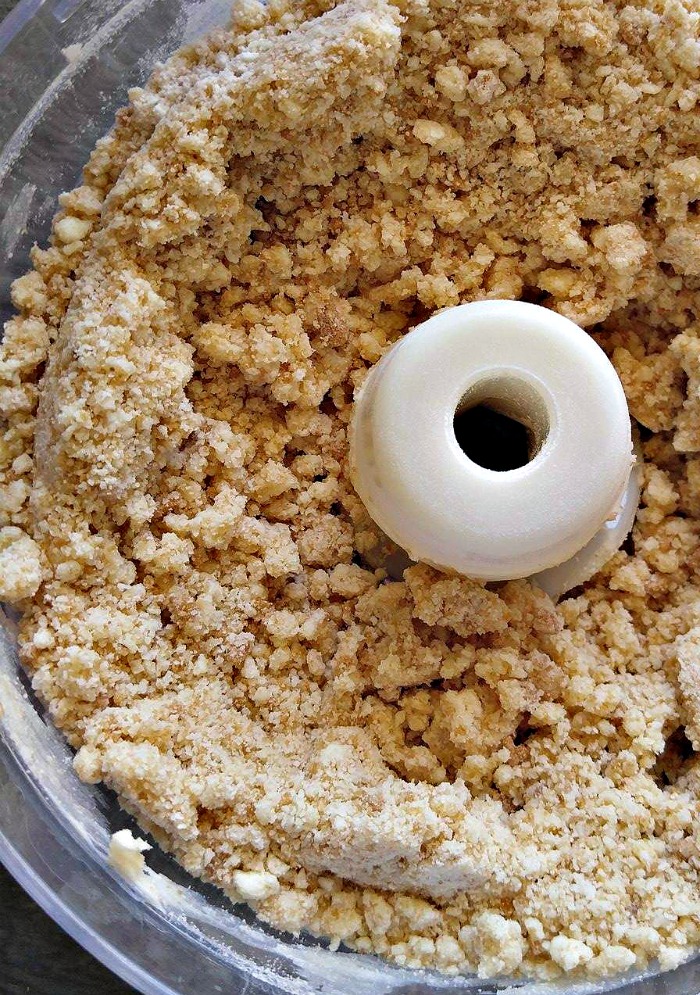 Some of the links shown below are affiliate links. I earn a small commission, at no extra cost to you if you purchase through an affiliate link.

How do I use a crumble crust in desserts?

This crust can be used in all sorts of desserts from bars and cheesecakes to pies and mini desserts. With Thanksgiving coming up think of the variations you could use for a pumpkin pie made with fresh pumpkin purée!)

Press the mixture into a square pan that is lined with parchment paper and sprayed with some non stick cooking spray. I use Misto sprayer.

Using a sprayer like this allows me to add whatever oil I would like and it is SO much cheaper than buying a store bought non stick spray. 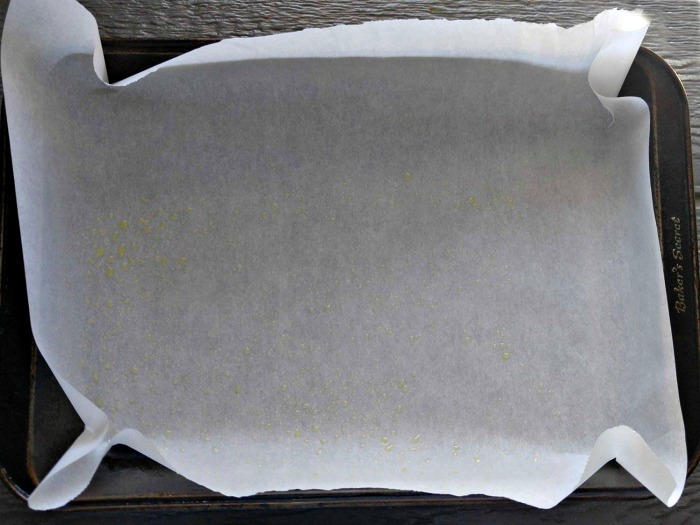 The bottom of a small measuring cup will press the mixture down evenly. 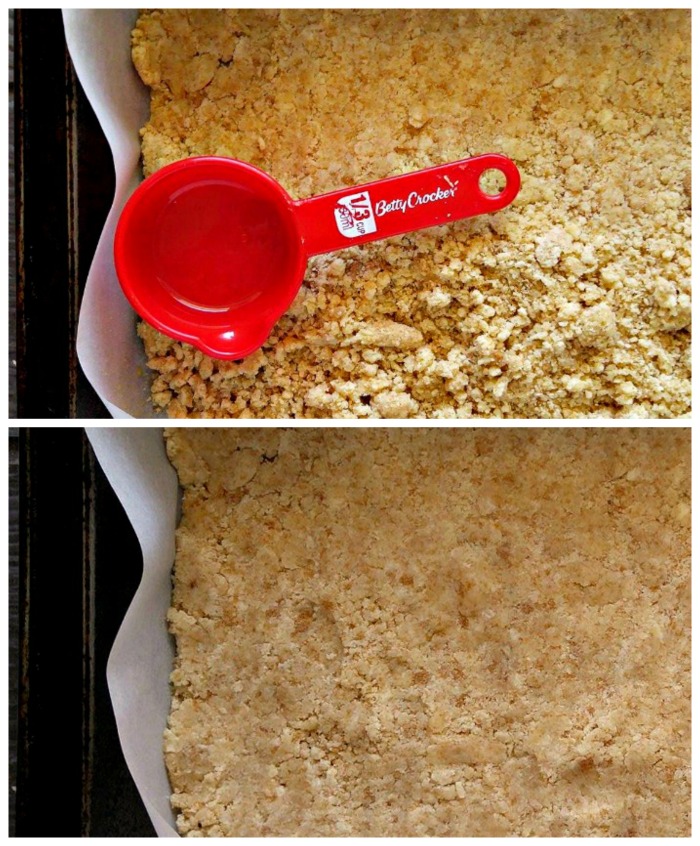 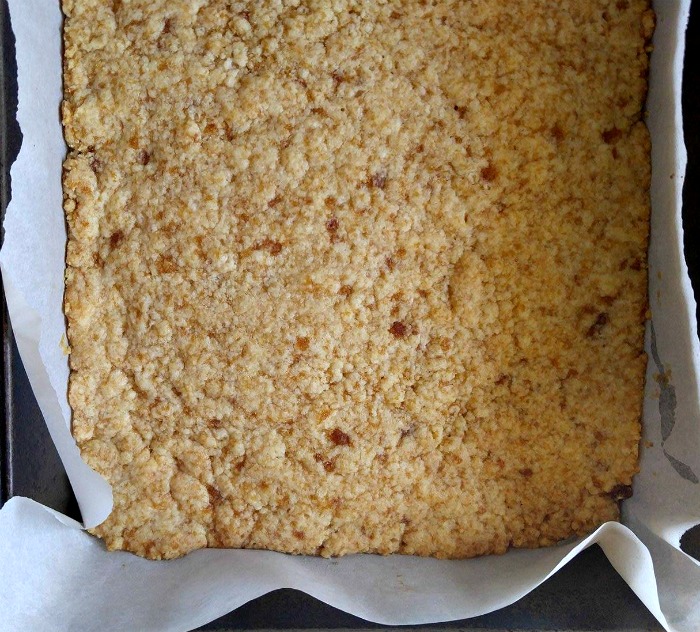 The crust puffs up a little and turns a light golden brown. Once it has cooled, you can add whatever you would like to for toppings.

This type of crust is perfect for fruit desserts but can also be used in lots of other ways.

My latest crumb crust got a layer of cheesecake as well as some cinnamon apples and a streusel topping and they were amazing!  See the apple cheesecake bars recipe here. 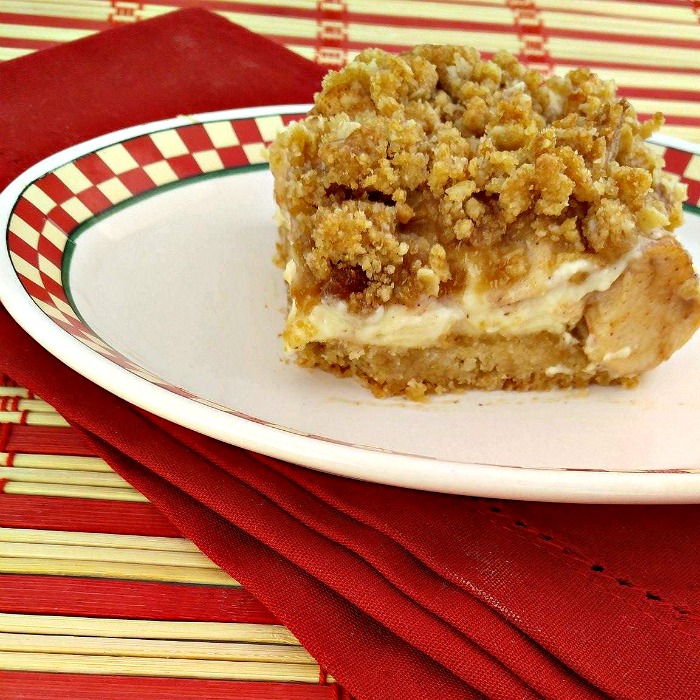 How to make a cheesecake crumb crust

Use a spring form pan and trace a circle the size of your pan on some parchment paper. Cut the paper and place the circle in the bottom of the pan. 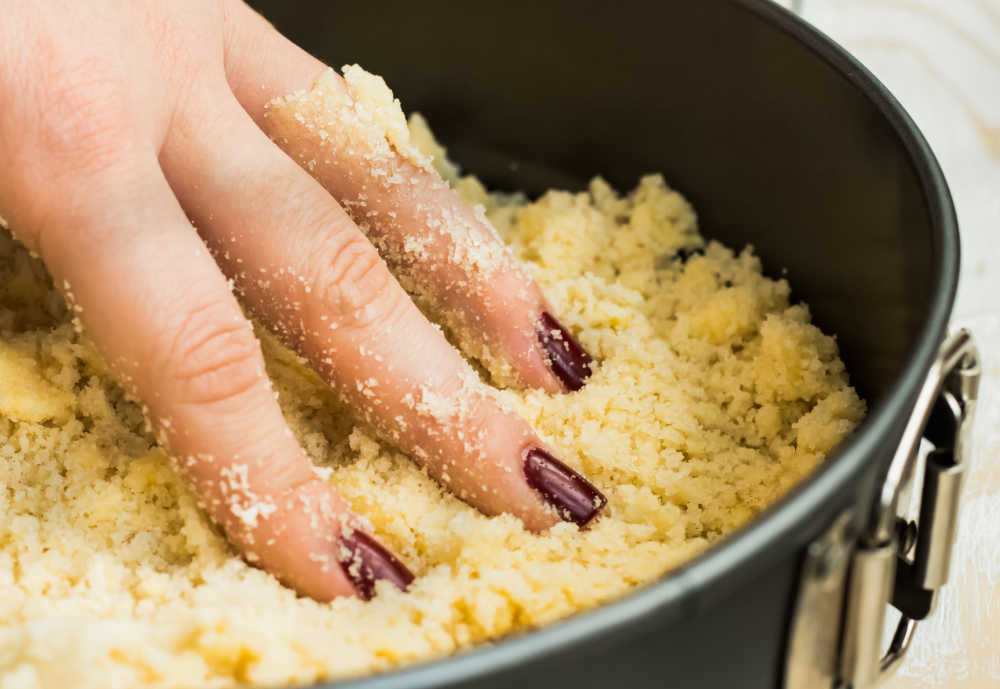 Add your filling mixture over the paper and press it down with a smooth surface like a measuring cup.

Generously grease your pie dish or flan plate and add the crumb mixture along the bottom and sides of the dish. Press firmly.

Add your filling mixture over the top and bake until done. Super easy and if you use it only on the bottom of the pie, it has far less calories than a pie with a double crust! 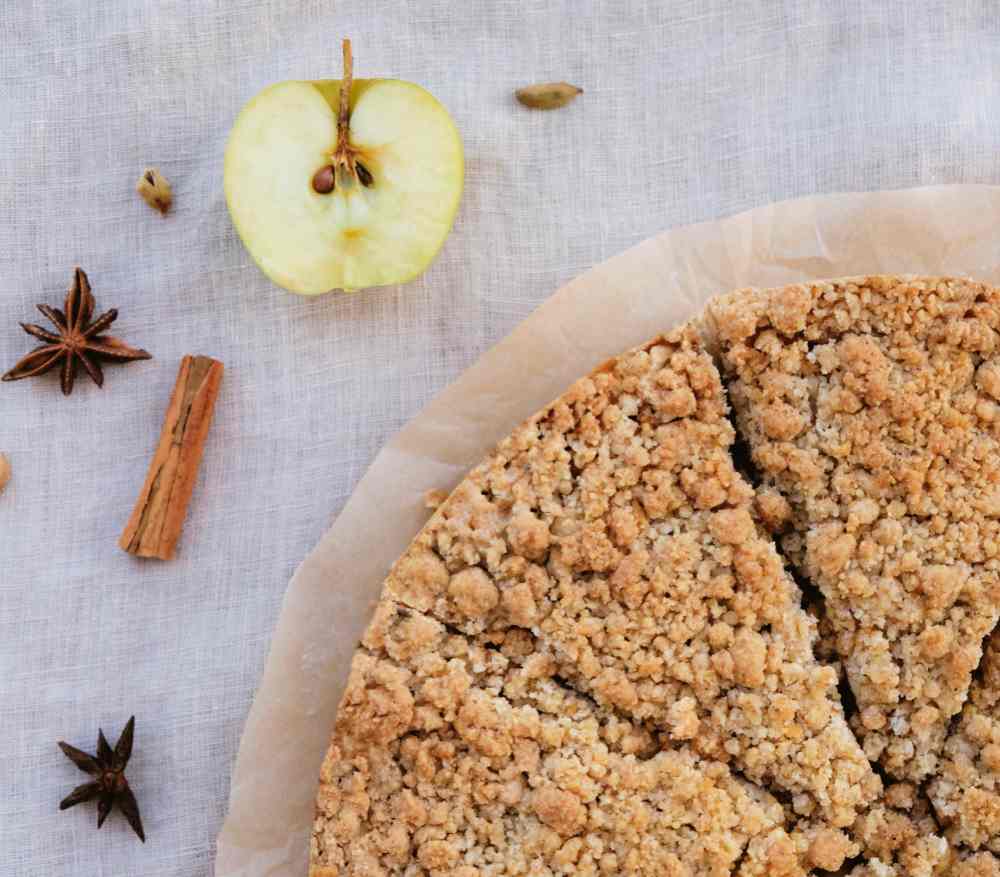 Another way to use a crumble crust on a pie, is to bake it in a normal pie crust on the bottom and add a crumble topping to the top layer.

How to make mini crumb crust tarts or cupcakes

Line a muffin tin with cupcake liners. Add a few tablespoons of the crumb mixture into the bottom of the liner. Press firmly.

Add your fillings to the top and bake. You can make cheesecake desserts, lemon desserts, even Easter themed crumble crust desserts this way. 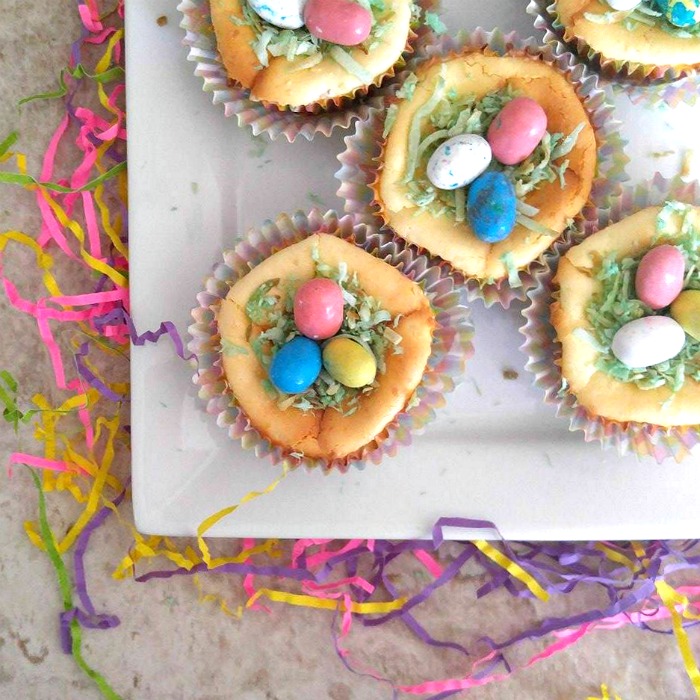 How will you adapt your crumb crust today? Tell us in the comments below.

For more Cooking Tips, be sure to visit my Cooking Tips and Kitchen Tips board on Pinterest.

Pin this post for making a crumble crust recipe for later

Would you like a reminder of this post for making a crumble crust? Just pin this image to one of your cooking boards on Pinterest so that you can easily find it later. 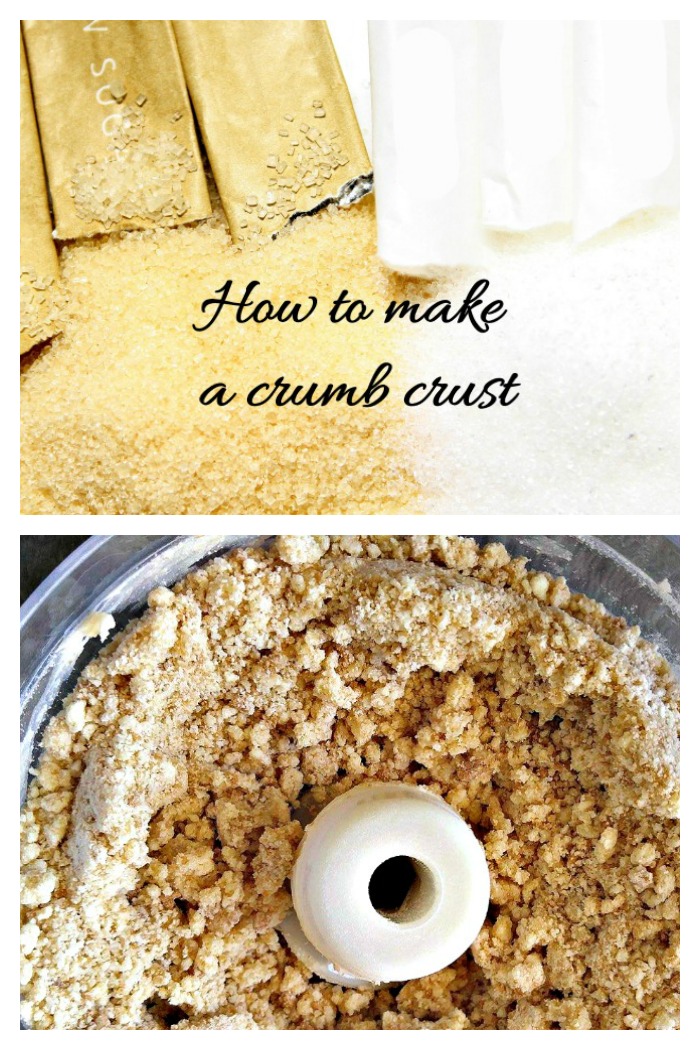 Admin note: this post for making a crumble crust first appeared on the blog in January of 2017. I have updated the post to add new photos, a printable recipe card with nutritional information, ways to use a crumb crust, and a video for you to enjoy.

Note: The photos in the tutorial show both white and brown sugar. You can use 1/2 cup of either.

Greetings, This was my first crumble and it was easy in the food processor The taste is delicious! I can’t stop sampling, but it’s a bit greasy and it’s not crumbling quite the way I want. What do I do?

Add more of the dry ingredients until it is the consistency you like.

I have not tested this recipe on a baked cheesecake but my understanding is that baked cheesecake crusts are normally baked first, even if just for a short time since blind baking makes the crust less soggy from the filling.

I'm trying to find a way to make crust for fruit bars-one that will 'hold up' , that is, will stay firm enough to be able to cut it without it crumbling. mine always fall apart ! Thanks !

Hi. It is a challenge. The nature of fruit bars is that the ingredients are juicy and that plays havoc with the crust. You could try freezing the crust after making it and then letting the filling cool before adding it and the topping. This should make it hold up better. Carol

Hi Samantha Thanks for alerting me to the typos. I have made a few adjustments so there is no confusion now. You can use 1/2 cup of either white or brown sugar. Both work well depending on the taste you are after. I have made it both ways. The ration is 1 cup butter, two cups of flower and 1/2 cup of sugar. It is all relative to taste though. If you like a sweeter crust, you can use more sugar. Carol

Thats a great reciepie. can i replace the sugar with a little salt to make it a savoury crumb keeping the flour and butter ratio same

Hi Neelima. Yes, you can add salt to the recipe. It will still work with the same ratios. Carol