What is not to love about such a pretty dessert?  This brownie cheesecake bar recipe has a creamy cheesecake topping that is layered on top of a fudgy, nutty brownie bottom and drizzled with dark chocolate.

They are easy enough for a busy week night and pretty enough for any special occasion. This tasty slice is one of my favorite bar recipes.

If you are having a gathering soon, these bars are a great choice for any party dessert table.

I like brownies, and I like cheesecake recipes. So, it stands to reason that I will love these amazing cheesecake bars. I bet you will too!

I like to change up my brownie recipe by doing something different to it.  (See my white chocolate peanut butter brownies here.) Today we are going to add in some cheesecake for a rich decadent flavor. It will turn an ordinary bar recipe into something really special.

The first time I made these bars, my oven had been on the blink for a whole week.  The element gave out on me the day my husband left for a week long trip and the store that sells replacement elements was closed the day he left.  He came back now with a new element ($42) and installed it in my oven.  I had to learn my oven’s baking habits all over again (it baked unevenly but I was used to it.)

I’m making these bars again today, but now I have a new convection oven. Can’t wait to see how they turn out in it!

We’ve all had those days. We know that there is nothing for dessert for dinner tonight and we know that the family will be asking for it, but there are so many other things to do today.  That’s when it’s time for a semi home made dessert. 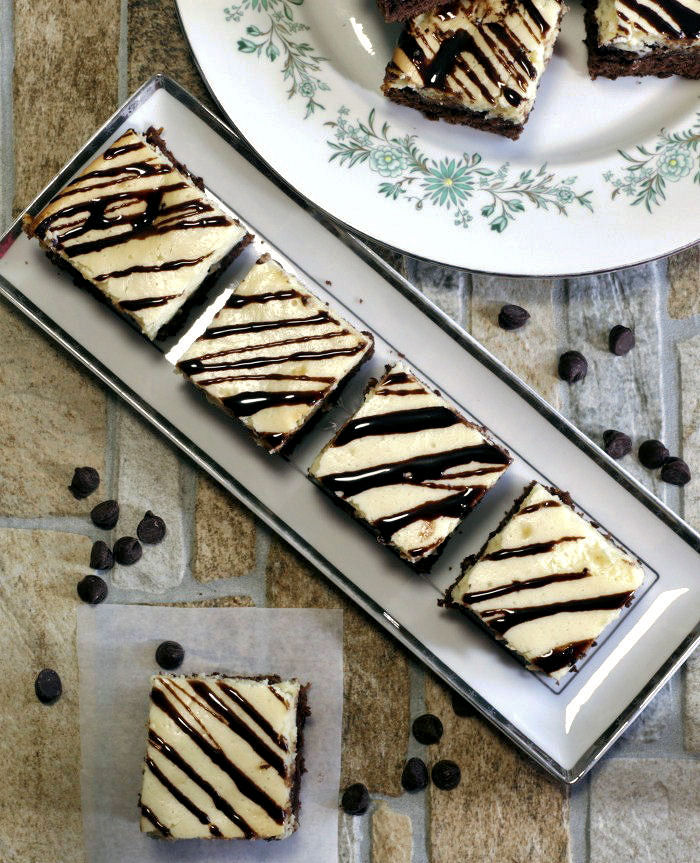 This type of recipe is part home made (the creamy cheesecake topping) and part semi home made (the boxed brownie mix.)  Even though these bars take a while to cook, the preparation time is only 10 minutes – not much longer than just the boxed mix but so, so much more special.

When I made this cheesecake brownie recipe the first time, I actually made a brownie bottom from scratch.  (don’t ask…I went to the cupboard and there was no brownie mix so I just made home made brownies for the bottom since I had all the other ingredients out already.)

But, today, I am remaking the chocolate cheesecake bars so that I can take new pictures and it will be made with a boxed brownie mix since I am really pressed for time. It will be interesting to see how it compares with the first attempt with a boxed mix and a new oven! 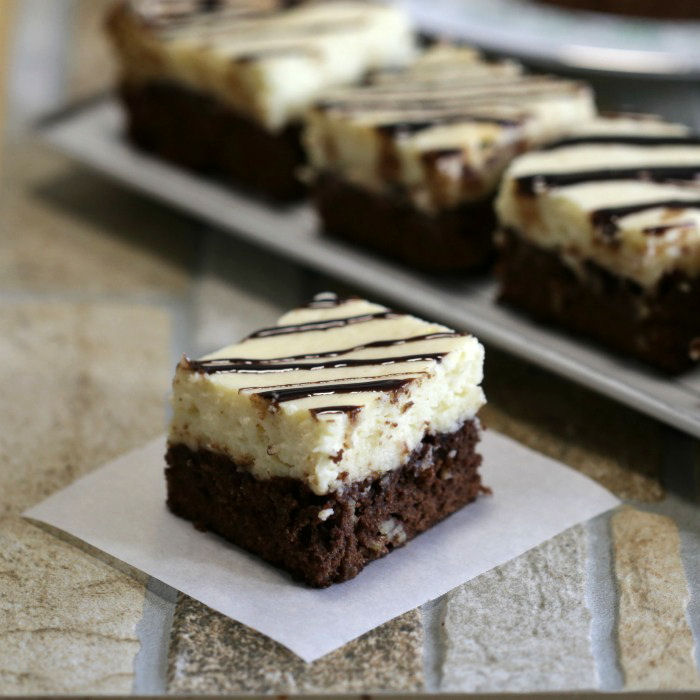 Today, I started by mixing my brownie batter and adding in some chopped pecans.  This gives the brownie base a nice crunchy texture and also gives the cheesecake something a bit more substantial to sit on. 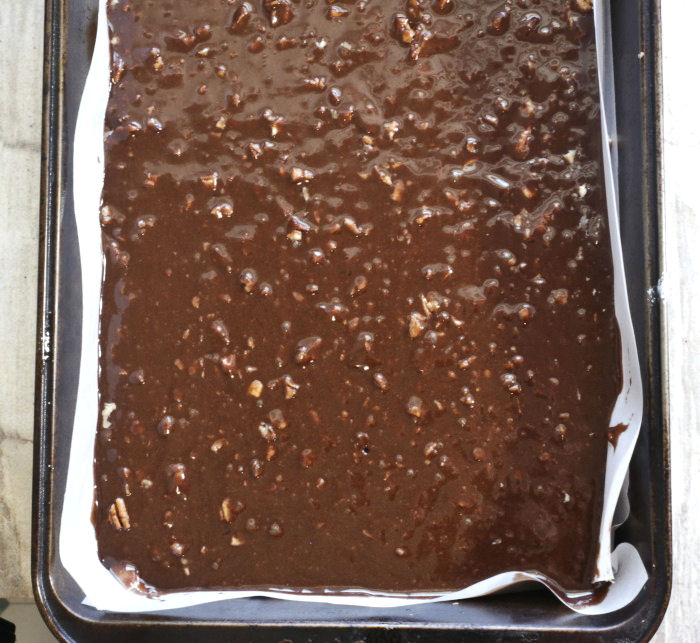 Next, beat the cream cheese in the bowl of a stand mixer until it is light and fluffy. Gradually beat in the sweetened condensed milk, egg and vanilla extract until the mixture is smooth. 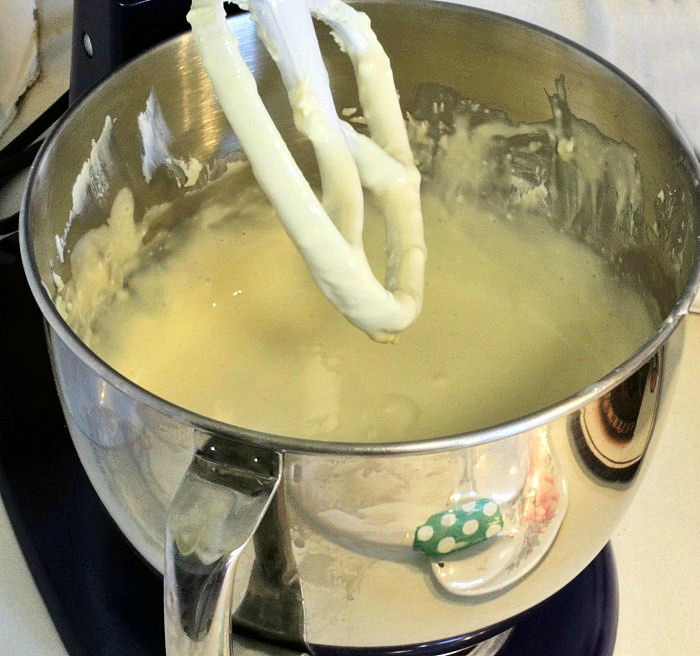 This yummy mixture gets poured evenly over the brownie bottom in the pan.

Bake the brownie bottom cheesecake bars for 40-45 minutes or until the top is lightly browned and a toothpick inserted into the center comes out clean. 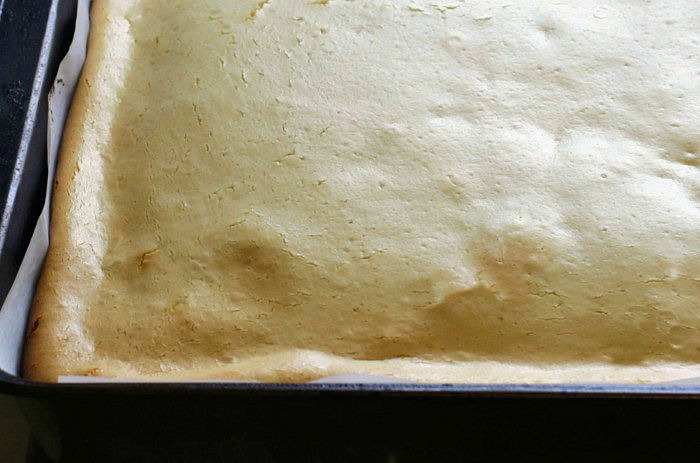 What I love about the bars is that they plump up so nicely.  I’ve made so many bars that are flat and lifeless.  In this case, what starts out looking like somewhat of an anemic and one dimensional dessert in the pan turns into a fluffy and heavenly dessert when they are cooked. These bars are nice looking enough to serve at a dinner party and taste delicious as well.

Let the bars get completely cool. Add some store bought chocolate syrup to an icing bag and drizzle it over the squares.  I put the syrup in an icing bag to get a finer consistency to the drizzle. I find that the store container is thick and doesn’t give me such a pretty finish to the squares. 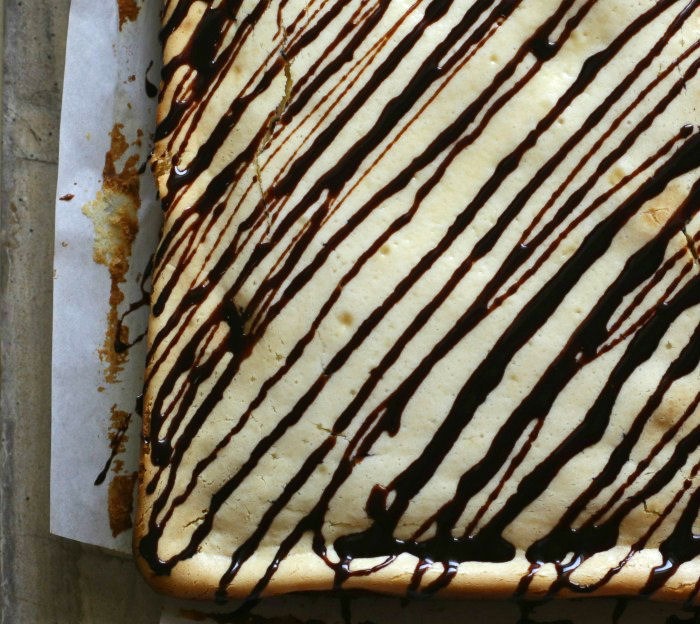 Place the squares in the fridge to chill and for another hour before cutting the pan into 24 squares. Cooking Tip:  A long sharp knife, heated under some hot water, and then wiped dry between cuts will give you lovely clean slices. 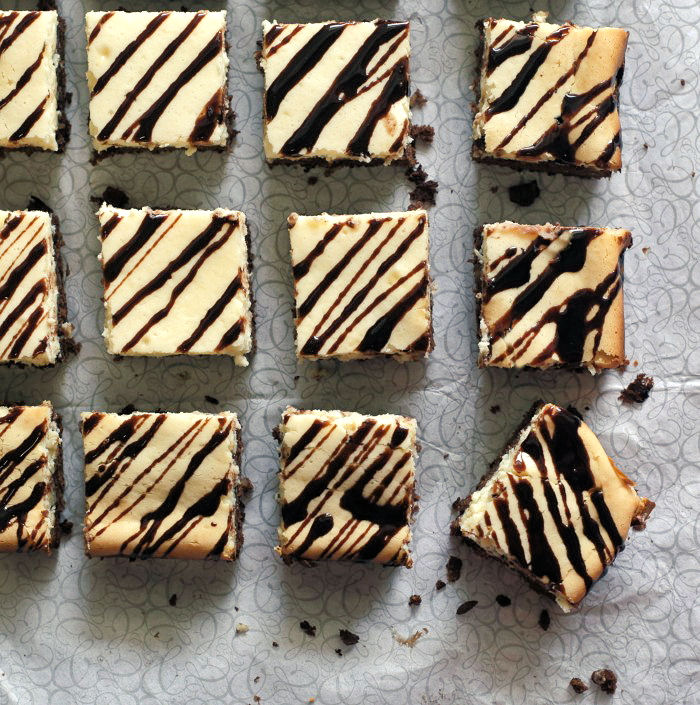 Every bite of these delicious brownie cheesecake slices is sublime. The crunchy bottom is nutty and chocolatey and the creamy decadent cheesecake topping is rich and so delicious. 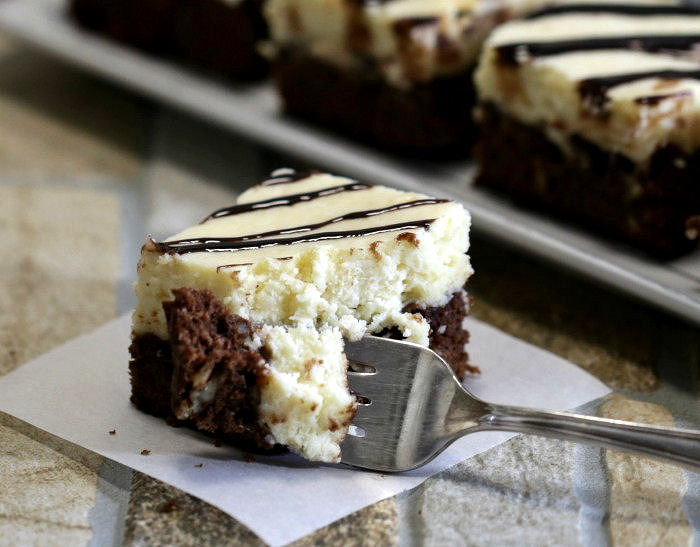 These easy cheesecake bars are perfect for spring and summer. Cheesecake is such a cooling dessert and stacking it on top of a rich fudge brownie gives you a dessert made in heaven. The bars will be a hit at any outdoor gathering. 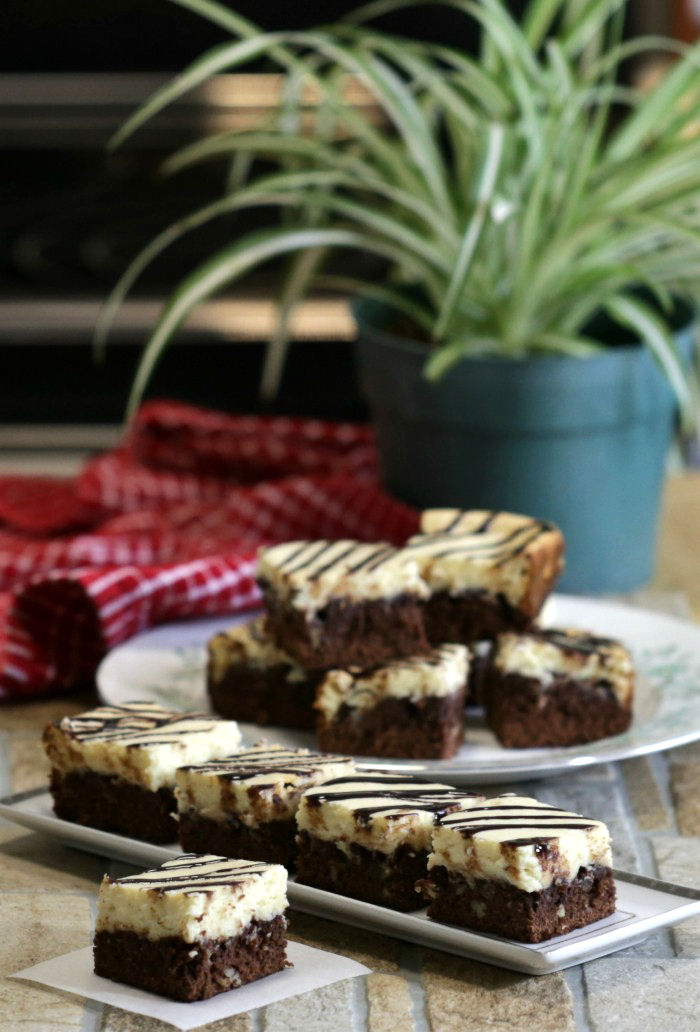 Take these yummy bars to a bake sale and watch them disappear in a flash at a pot luck dinner. 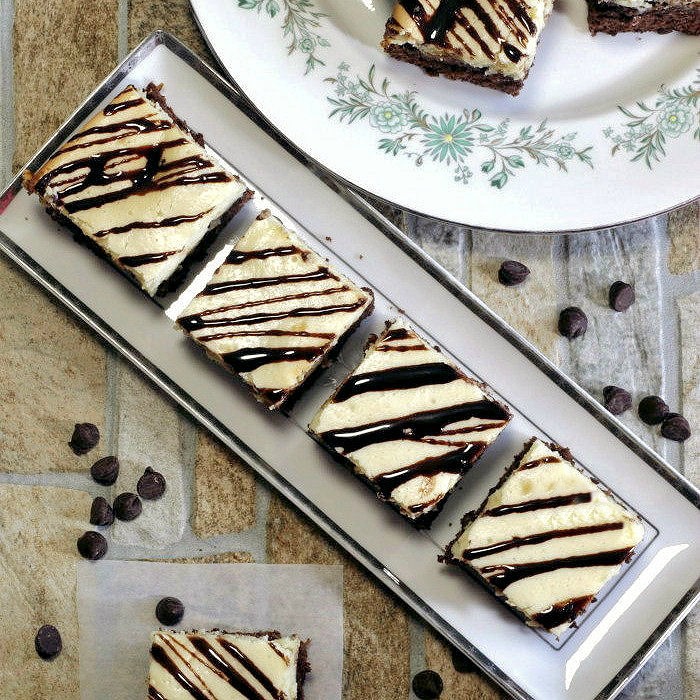 Are you as much of a fan of brownies as I am? Try one of these recipes, as well.

Admin Note: This recipe first appeared on my blog in January of 2014. I have updated the post to add new photos, and a step by step tutorial as well as adding nutritional information. Enjoy!


This was a photo of the bars made the first time with the homemade brownie mix.  It’s been a while, but honestly, I think the boxed brownie mix tastes very similar. It’s the cheesecake that gives the bars most of its flavor!  Also, I didn’t use the icing bag for the drizzle on these and see how it puddled? 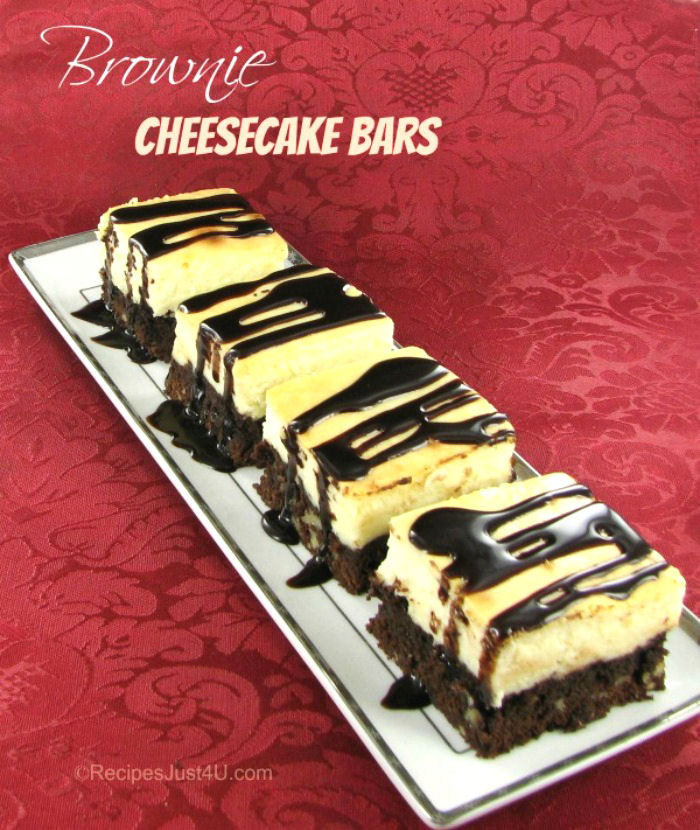 Nutritional information is approximate and depends on the size of eggs, and type of brownie mix you choose.