This baked chicken cordon bleu is a lightened up version of the traditional Swiss favorite that is so popular in upscale restaurants. The chicken is wrapped around ham and melted cheese and then baked to perfection.

Chicken cordon bleu is a delicious Swiss recipe that features thin chicken cutlets rolled around a ham and cheese center, then dipped in bread crumbs and either pan fried or deep fried. 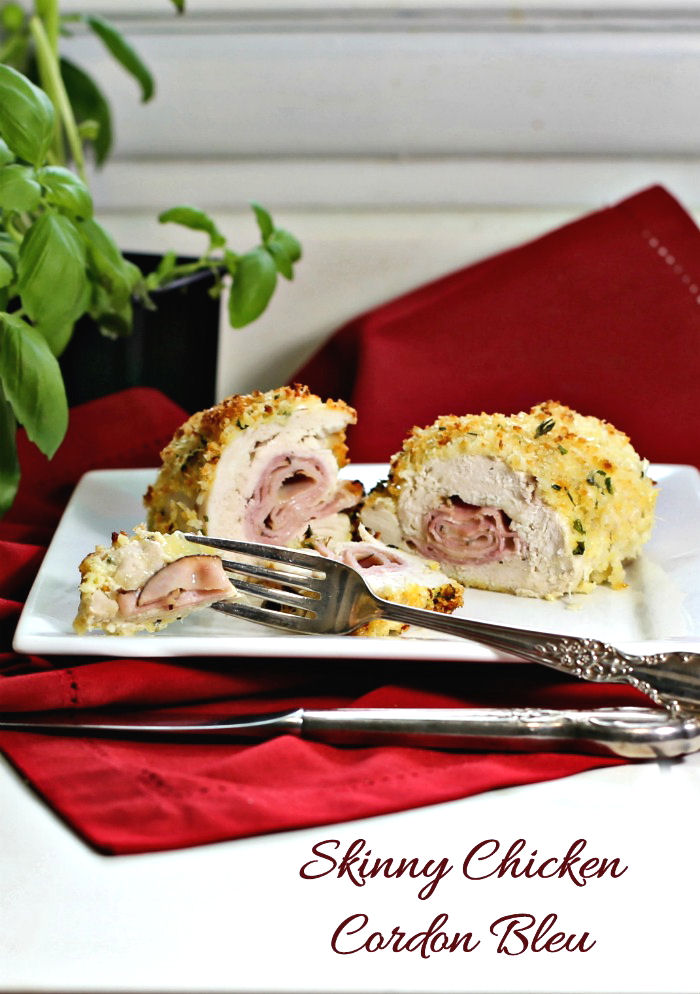 How to Lighten up Chicken Cordon Bleu

The recipe is full of flavor but also full of calories and fat. It is one of my family’s favorite chicken recipes. Let’s see what we can do to lighten the load, shall we? 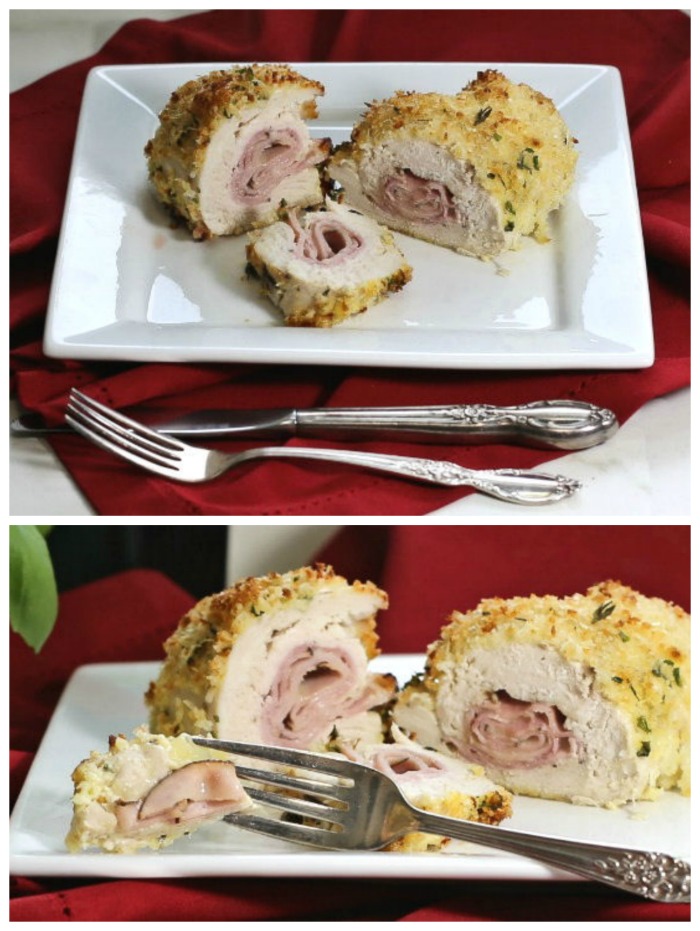 I made a few substitutes and then also changed the normal cooking method to lighten the calories on this dish. That means doing these things:

Let’s get started on this baked chicken cordon bleu

The flavor of these delightful parcels comes from tender boneless chicken, fresh herbs, (I try to always use fresh herbs for cooking to boost the flavor of a dish) real cheese and some thin ham. 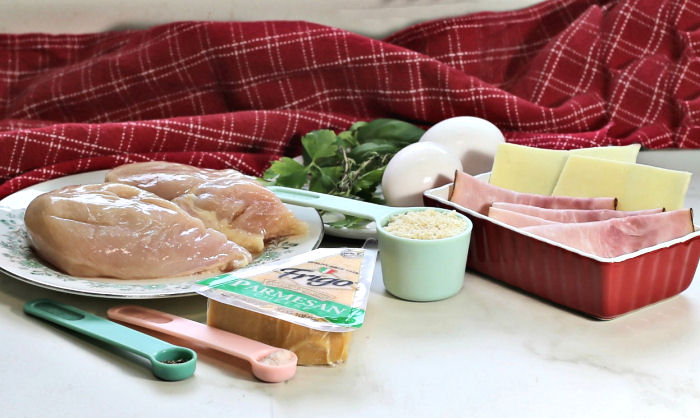 I decided to use boneless, skinless chicken for my recipe and pounded it thin.  You can also use store bought thin chicken cutlets, but they will cost more and it’s not that hard to make them thin. 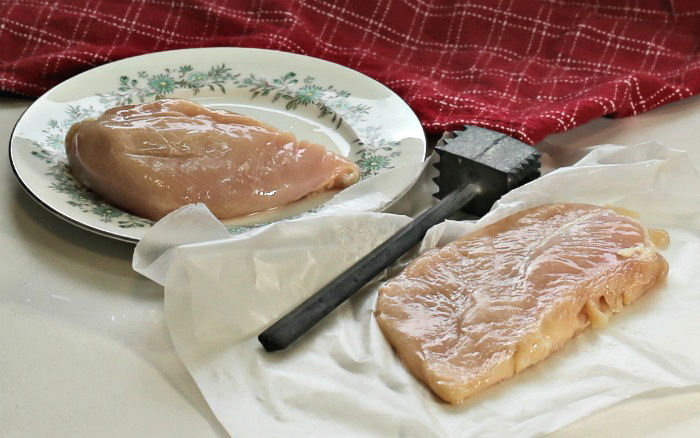 Even though I used less of the Parmesan and grated it myself, I didn’t skimp on the cheese that is used as a filling. I chose full fat extra sharp flavor for the flavor that it gives.

Chicken cordon bleu is often made with Swiss cheese but I chose Extra Sharp Cheddar for more flavor. One slice for each piece adds a great taste.

Fat free cheese is something I rarely use. It doesn’t melt well and tastes nothing like genuine cheese. I just choose to use less of the real thing.

Once the chicken pieces are nice and thin I layered them with the ham and cheese. 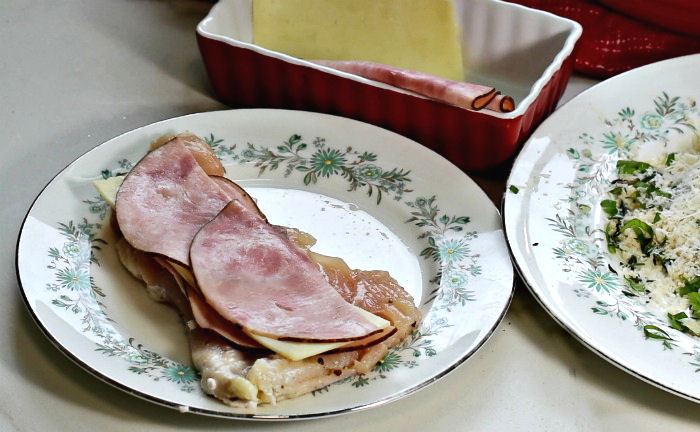 I cut both the ham and cheese pieces into half. Each of the chicken breasts gets topped with 2 whole slices of ham (four 1/2 pieces) and a piece of cheddar cheese between the ham layers in two halves.

Once you have them filled, just roll them up and fasten with a toothpick.

I love using Panko as a coating for oven “frying” this healthy chicken cordon bleu.  The crumbs are very light and they bake up beautifully, giving the impression that the dish has been fried, but saving a ton of calories. 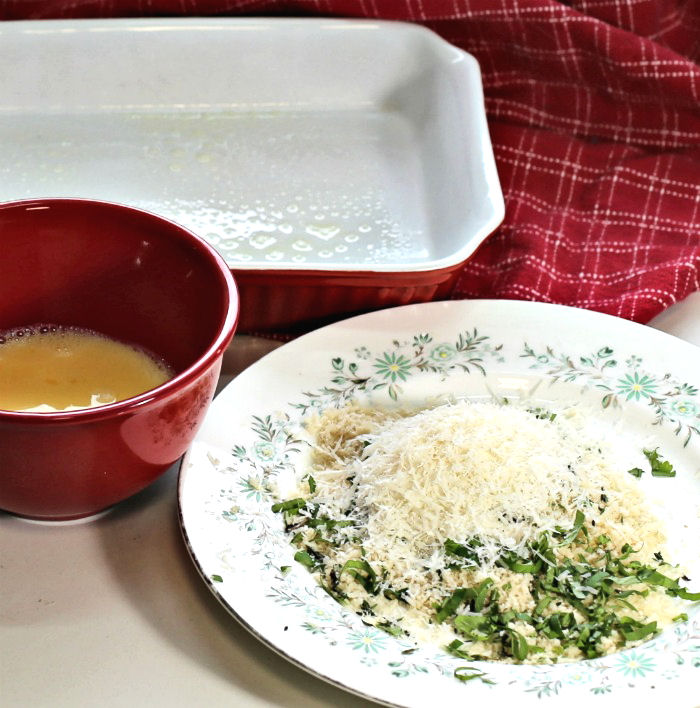 Fresh herbs and finely grated Parmesan cheese  get added to the Panko (see how much a half ounce of the real deal is?) Fresh Parmesan is very light and 1/4 oz is only 1 point on Weight Watchers!

The egg wash is just eggs and water.

Dip the rolled chicken pieces into the egg wash first and then rolled them in the bread crumb mixture.  You don’t need them to to be completely coated.

Any coating left after you roll the two pieces can get added to the top of the parcels. 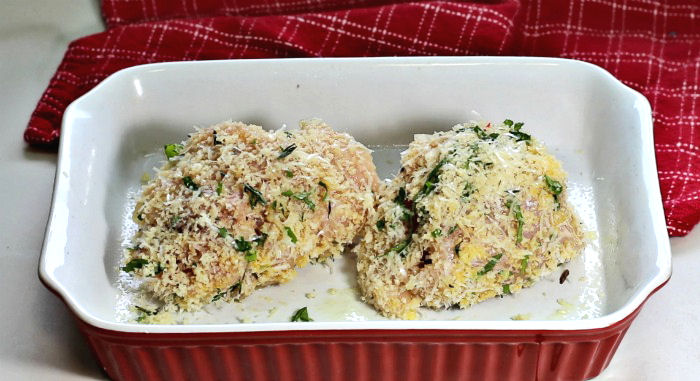 Spray with Pam cooking spray and bake in a preheated oven for about a half hour until the chicken is cooked.

You will be amazed that such a light dish can turn out to have such a decadent taste. 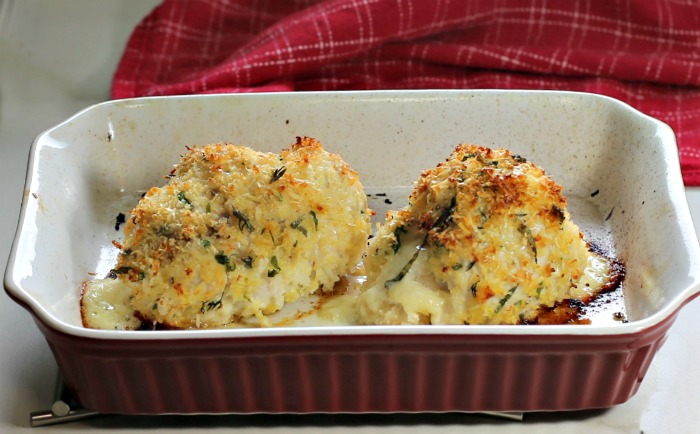 The outside of the chicken pieces is crispy and crunchy with a fresh herb and Parmesan taste.  When you bite into it, you get the full flavor of the Black Forest Ham and sharp cheddar.

It is rich, decadent and so, so tasty.

This dish is perfect for a busy week night, since it is quick to prepare, but elegant enough for any special dinner party. Your diet conscious friends just won’t believe how much you lightened the normal recipe up. 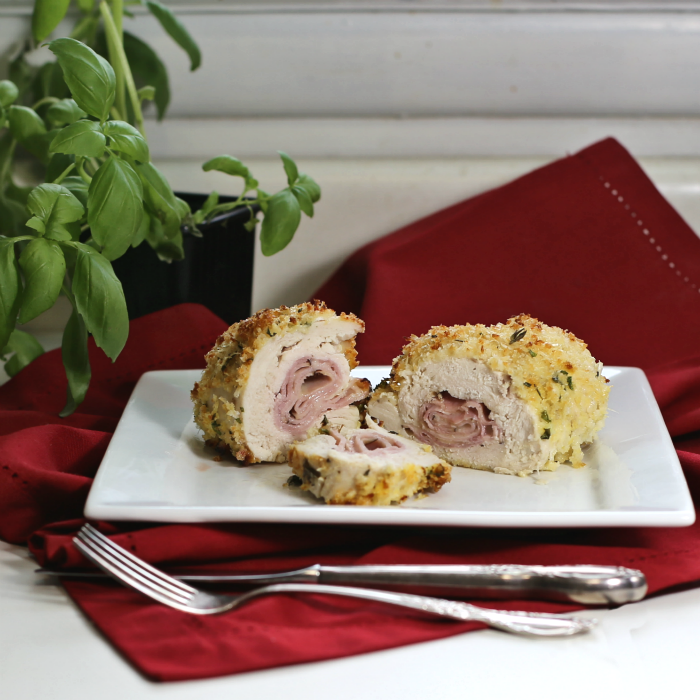 I have easily saved over 150 calories on a traditional cordon bleu recipe, and the serving is larger to boot! Each of the parcels has only 311 calories and is loaded with 39 grams of protein.

The parcels work out to just 6 WW Freestyle points each which makes them easy to fit into your daily allowance.

Would you like a reminder of this recipe for baked chicken cordon bleu?  Just pin this image to one of your healthy cooking boards on Pinterest.

Admin note: this post for making baked chicken cordon bleu first appeared on the blog in December of 2018. I have updated the post to add new photos, a printable recipe card, and a video for you to enjoy.

When you are making the parcels. position the fillings towards the thinner end and over the top edge a bit to make rolling easier.

As an Amazon Associate and member of other affiliate programs, I earn from qualifying purchases but the price is the same for you.