Traditional Amish food is very simple and something that we associate with the group today. We think of it as comfort food.  It usually has simple, plain ingredients. 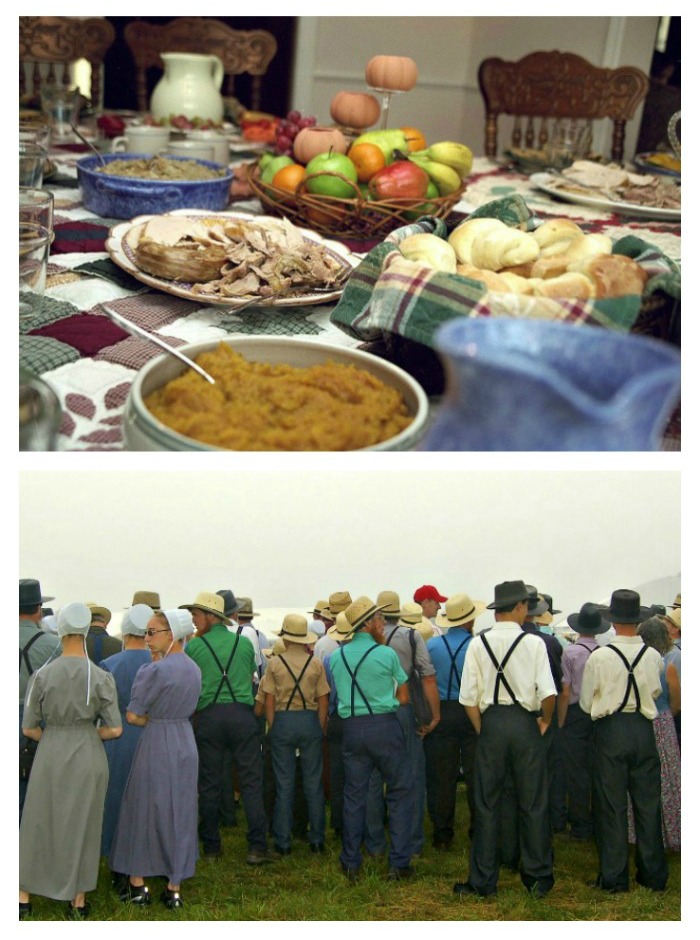 Where are Amish people living in the US?

The Amish people are found in the United States in several rural areas, but primarily around Ohio and Pennsylvania, and also in smaller numbers in Ontario, Canada.

Lancaster, Pennsylvania is home to about 16,000 Amish people and is in the heart of the Pennsylvania Dutch area.

Information about Amish Food and Customs.

The Amish people are known for their simple living and homes, their plain dress code and for a reluctance to adapt to modern conveniences.

They grow their own food and cook hearty foods. There is a large tourism industry connected to the Amish, especially during the summer months. 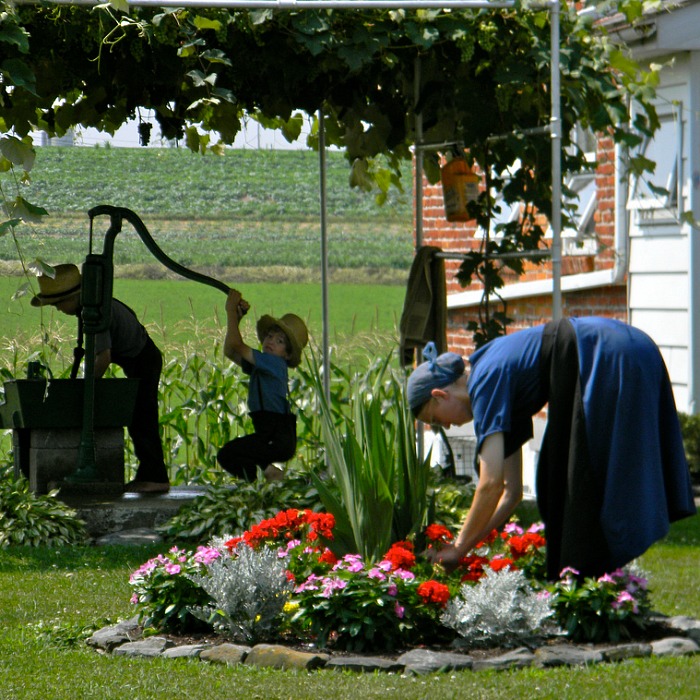 While the countryside in Pennsylvania is dotted with large, lavish homes with huge barns, the Amish farms are much simpler.  There are many tours in Pennsylvania Dutch country allowing one to tour the inside of their rustic abodes. 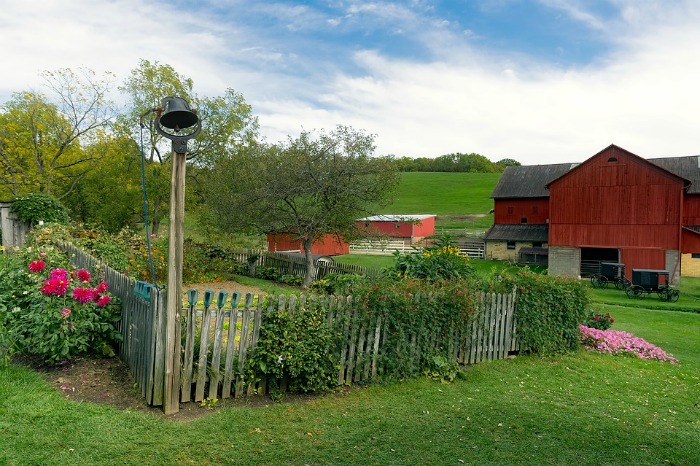 Anyone who has been through Pennsylvania Dutch country will have seen horses and buggies such as this one on the streets, since this is their normal mode of travel.

We often travel north to visit my family every summer and the roads have lots of corners on the.  We have to be very careful not to come around corners too quickly! 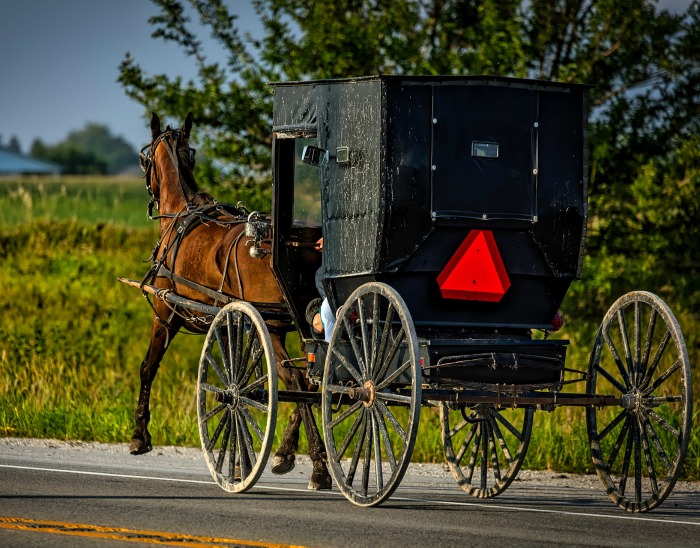 While there have been some adaptations to account for technology, in a small way, in areas of the Amish communities, they still live a very simple lifestyle.

Old Order Amish, and most likely some New Order, too do not have their photos taken, which is why this photo might have been taken from behind. 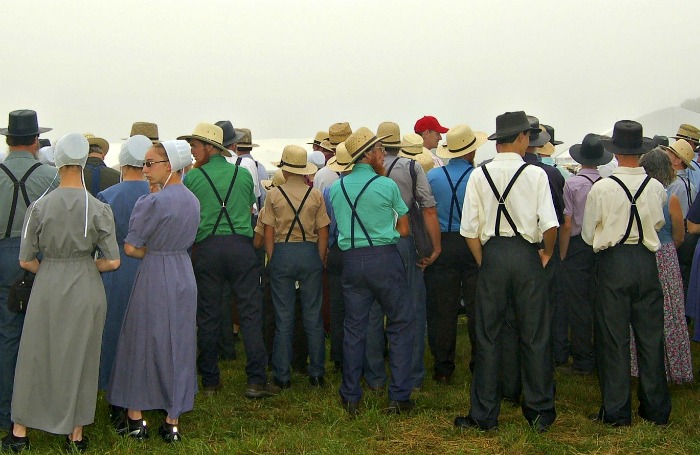 What kinds of foods do Amish eat?

Amish food is known for being simple is considered very much home style cooking.  Many eating establishments in the Pennsylvania Dutch area serve “family style” with platters of food being shared by large tables of people who may have just met that evening.

My husband is very social and loves this style of eating on our trips north since it gives him a chance to make new friends! 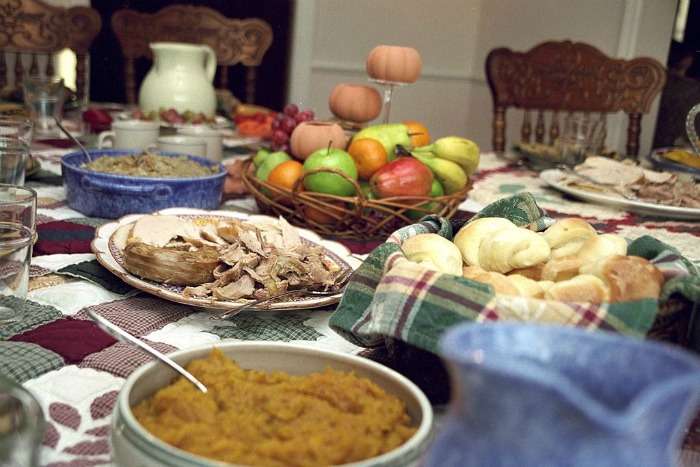 Much of what the Amish use in their cooking is food that they have grown themselves, whether it is vegetable or animal. Much of their farm machinery is horse drawn.

The Amish often sell the food that they produce as well as using it for their own needs to supplement the earnings of their communities. 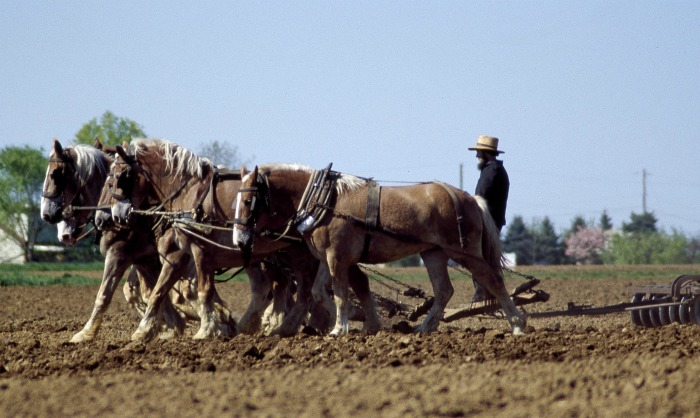 Many of the local stores serve pies, preserves, bread mixes, potato salad, and pickles as well as canned goods and desserts. 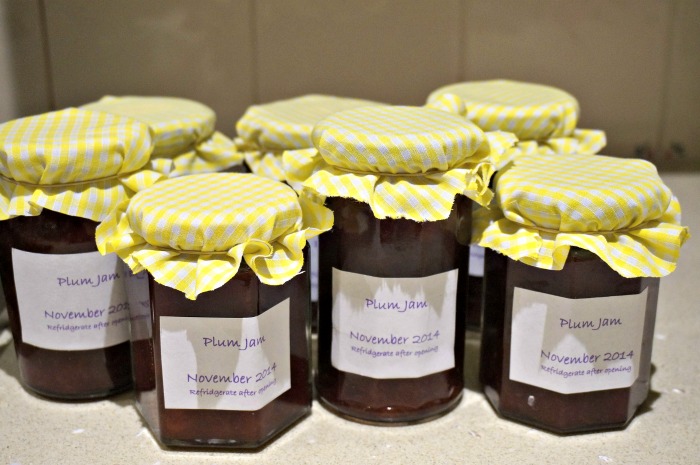 The Amish community spends a great deal of their time in manual labor, as they tend their crops and farms, and they use few modern conveniences to prepare their foods.

For this reason, they are not as concerned about the amount of fat in their diet as modern Americans are. Many of their breads and cereals are prepared from whole grains.

Why are the Amish people a healthy community?

The Amish people are known for being quite healthy in old age.  One of the reasons is the high level of physical activity that is performed, since so many tasks are done by hand.

It’s not uncommon for a normal Amish man to take over 18,000 steps in a day, and women take almost 15,000. That is a far cry from our habits. The average American does well to make it to 5000 steps in a day (just half the recommended amount.)

It is also rare for Amish people to use tobacco so their rate of lung cancer is low.

This is not the case for cardiovascular disease, where the Amish have high blood-pressure and heart-disease rates slightly higher than those of other members of the population. (This is likely due to diet.) 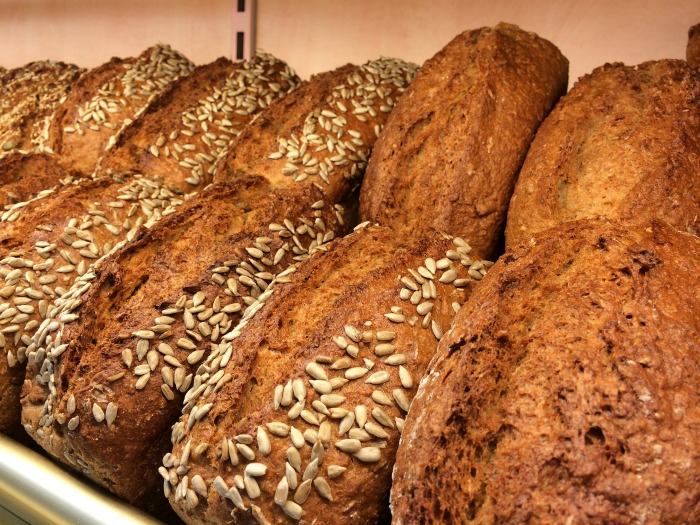 The starter substitutes for baking yeast and can be used to make various kinds of breads. It can also be frozen and used later.

I once received some from a friend and used it for months and months to make new loaves of bread. 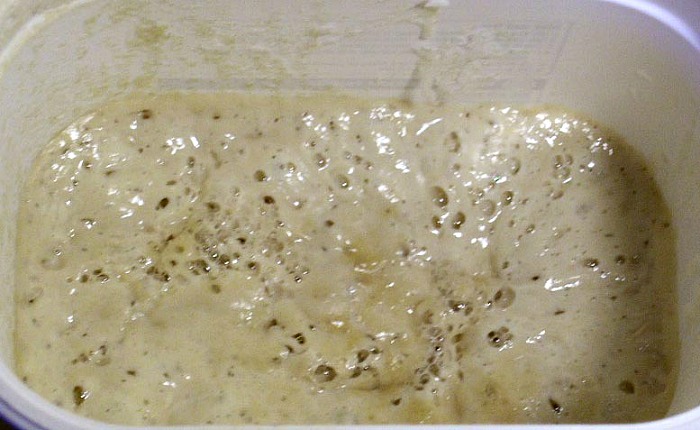 Another recipe that seems to be synonymous with the Amish people is a shoofly pie. This “cake in a pie” dates to the late 1800s. It was often eaten with breakfast and uses molasses as an ingredient. 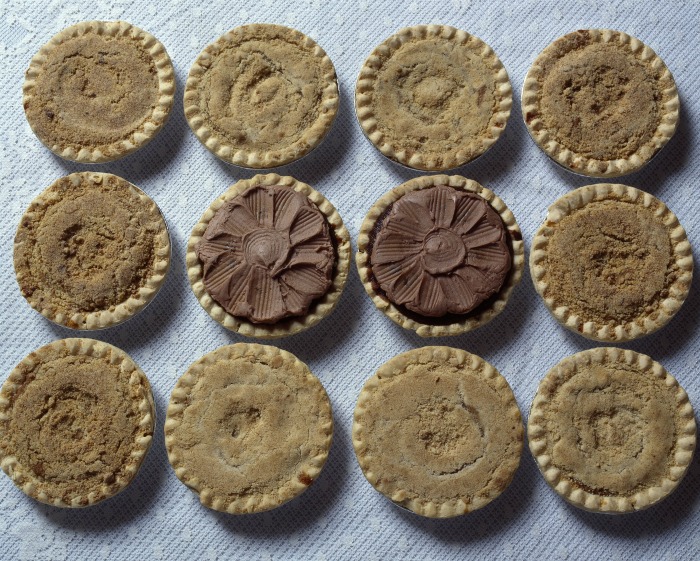 As you travel through Amish country, it’s common to see Amish road side sellers.

One of the regular vendors to a Farmer’s market in my home town in Maine is an Amish couple. They sell food products as well as some home made goods. 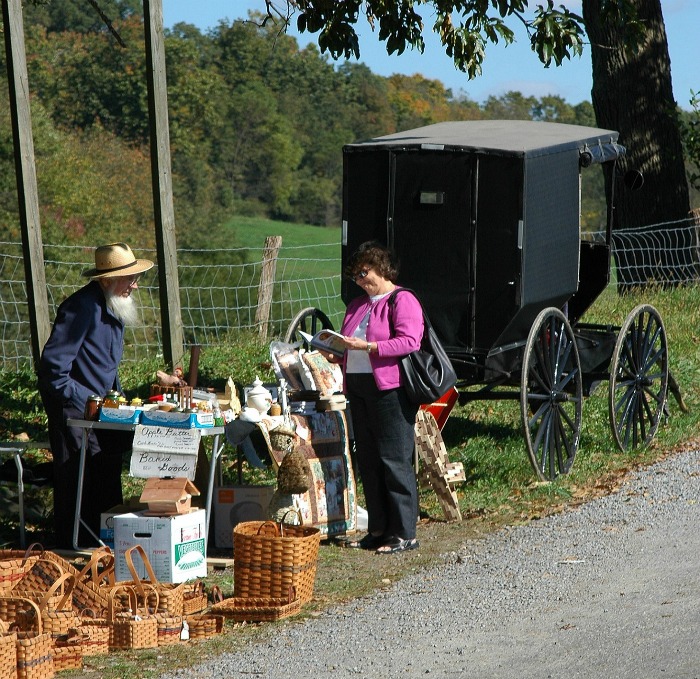 People from all over the USA travel to Pennsylvania Dutch country to view the quilts made my Amish and Mennonite women.

Quilts in the Amish community are used in a functional way, and are not considered art, for art’s sake. 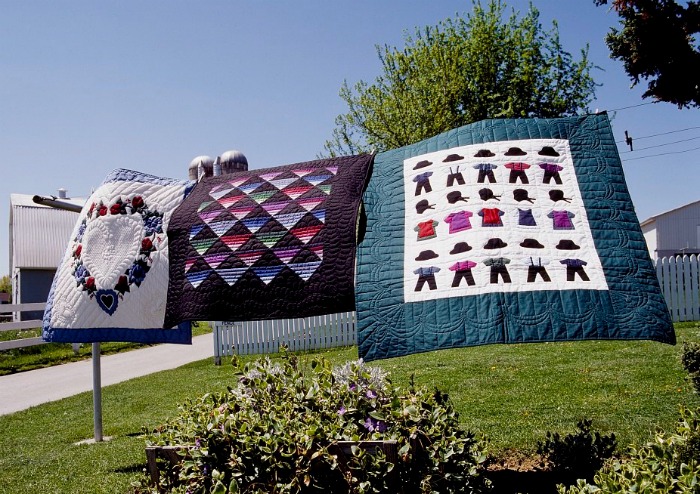 Amish quilting didn’t become a tradition in Amish homes until the late 1800s.  The technique was originally brought to the USA by British Quakers but did not catch on in Amish communities.

Even when they did adopt quilting, early Pennsylvania Amish quilts were quite subdued in color and design. However as the Amish moved around the country, they started using more colorful fabrics and colors.

My mother was a long time quilter and many of her designs are fashioned on Amish quilt designs.

What about Hex signs? Are they Amish?

On our last trip north, we spotted many buildings and barns that had Amish hex signs on them. Hex signs are a form of Pennsylvania Dutch folk art. Stars in circles are common.

They first started appearing in the early 19th century and become popular in the 1950s as tourist items.

There are superstitions attached to them. While these signs are common, the Amish people themselves don’t use hex signs. 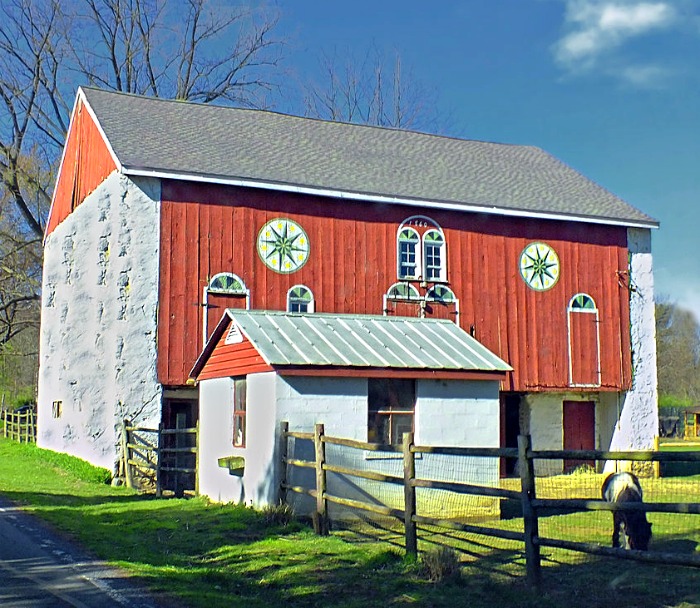 The Amish diet traditionally focuses on the simple, hearty foods.  Many of their meals use these following ingredients: 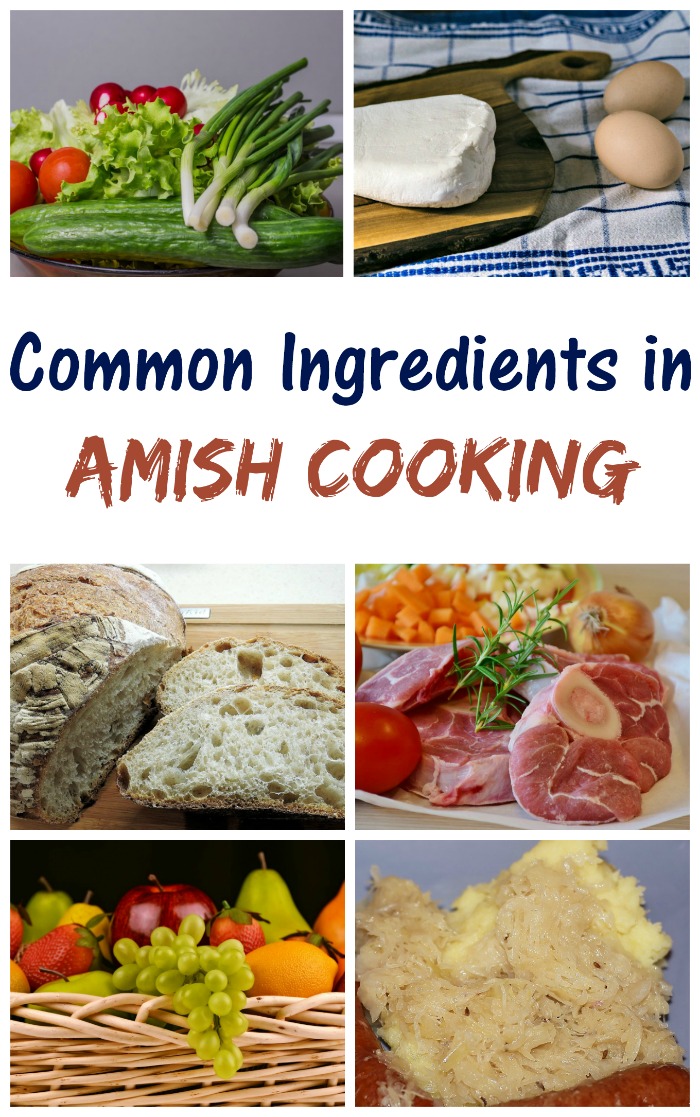 Some of My favorite Amish Food Recipes:

If you would like to try Amish cooking, a trip to Pennsylvania is not necessary.    I’ve put together a round up of Amish recipes that will delight the most ardent “home cooking” fan. 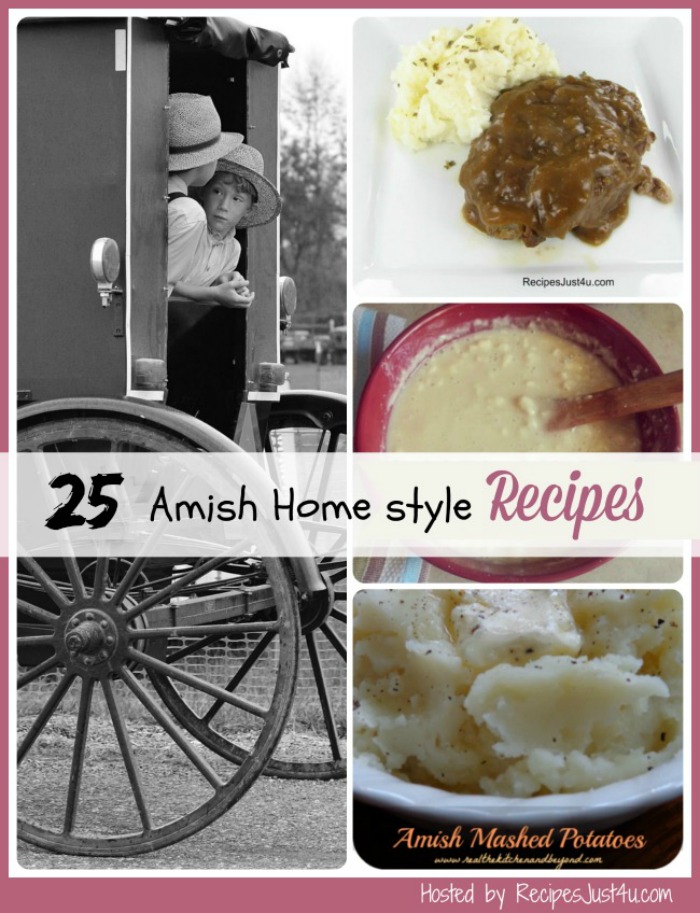 Admin note: This post about Amish food and traditions first appeared on the blog in October of 2013. I have updated the post to include new recipes and photos as well as a video for you to enjoy.

Disclosure of Material Connection: Some of the links in the post above are "affiliate links." This means if you click on the link and purchase the item, I will receive a small commission, but the price will be the same for you. Regardless, I only recommend products or services I use personally and believe will add value to my readers. I am disclosing this in accordance with the Federal Trade Commission's 16 CFR, Part 255: "Guides Concerning the Use of Endorsements and Testimonials in Advertising."

Hi! I am Carol and I love to garden and cook (with a bit of DIY thrown in for fun.) I come from a long line of gardeners and have always loved to experiment with food and recipes. Join me as I cook and garden my way through life.

Copyright & Permissions © 2020 - Carol G Speake. All content on this site is ©Carol G Speake (Recipes Just 4U) unless otherwise stated.